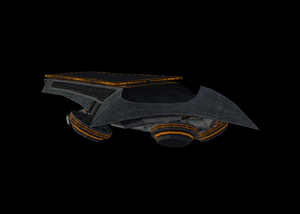 Pirate Skiff, referring to stolen models) is apparently a predecessor to the later Space Pirate ATC as the Space Pirate's favored mode of transporting troops into battle.

Based on stolen plans for the Galactic Federation's Shrike, the Skiff is unarmed, relying on the troops it carries into combat to cover it from hostile fire.

It can be distinguished from the Pirate ATC and Space Pirate Assault Skiff, appearance-wise, by having no armor or roof, appearing to be essentially a flying platform. With enough firepower, it is possible for Samus to destroy these vehicles. In doing so, the explosion will also kill any Pirate Troopers on the vehicle.

Thus far, the Pirate Skiff has only appeared in Metroid Prime 2: Echoes.

Plans for the Shrike were recently stolen from a GF lab by the Space Pirates. Production began immediately, and the fast-moving skiff is now part of Pirate operations. It's used primarily as a troop transport, taking a fire team of troopers into action. The Shrike's unarmed, relying on the troops it carries for protection against hostile forces.

Pirate Troopers arrive at the Torvus Temple on a Pirate Skiff to ambush Samus.
Add a photo to this gallery
Retrieved from "https://metroid.fandom.com/wiki/%22Shrike%22_Class_Assault_Skiff?oldid=271884"
Community content is available under CC-BY-SA unless otherwise noted.