Wikitroid
Register
Don't have an account?
Sign In
Advertisement
in: Articles with non-canonical information, Substances, Zebes,
and 5 more
English

For other uses, see Acid (Disambiguation).

Acid is a hazardous chemical compound found throughout the Metroid series.

Acid does harm to Samus Aran's Power Suit at a rapid pace due to its corrosive effects. It also impedes her movement. Once Samus has acquired the Varia Suit in Metroid: Zero Mission, she becomes immune to the effects of acid.

Acid is mostly present on Zebes, particularly in the region of Brinstar. Kraid's Lair features enormous pools of acid, though some of these are actually fake acid and will disappear when Samus makes contact. Crateria features Acid Rain, but this is not strong enough to damage Samus's basic Power Suit.

Certain creatures, such as the Acid Worm and Geegas thrive in acid. Some creatures, like Kihunters, spit acid at Samus to damage her.

In Metroid Prime 3: Corruption, the Pirate Homeworld was doused in Acid Rain. Unlike Acid Rain on Zebes, Samus was not adapted to the environment (even in her PED Suit, which was upgraded from her Varia Suit) and would be constantly damaged by the rain until she acquired the Hazard Shield. This may suggest that the level of acidity in the rain is different from acid on Zebes.

The Kihunters in Super Smash Bros. for Nintendo 3DS spit acid at fighters during Smash Run, just like in canonical Metroid games. Their acid spit penetrates shields and stuns fighters. 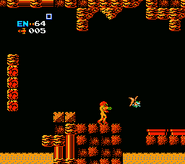