The "Acid Statue Room" is a large room in Lower Norfair. It appears in Super Metroid.

This room is a large shaft found immediately to the left in the depths of Norfair, after the elevator corridor. Ruins of the Chozo civilization are present here, consisting of a large basin that is filled with scalding-hot lava. The room's name comes from speedrunners, referring to the lava, which is called "hydrochloric acid" in the Japanese strategy guide for Super Metroid. A wall on the left, made of Power Bomb Blocks, hides an upright Chozo Statue with its hand outstretched. Samus must Space Jump over the lava and destroy the wall, then morph into the statue's hand.

When she does, the hand lowers and clenches around the Morph Ball, and the statue's eye lights up. Suddenly, the room shakes and the lava drains almost entirely from the basin. When this is done, the statue's hand loosens its grip on Samus before dropping her, allowing Samus to fall into the now empty basin. There is a small hole at the bottom of it, which Samus can fall through to enter a narrow passage blocked by ornate bricks. A Power Bomb will remove these, allowing Samus to continue into corridor with platforms over pockets of lava. Several Holtz and a Magdollite inhabit this part of the room. At the end of the corridor is the exit, into the Golden Torizo's chamber.

Interestingly, the Chozo Statue will not activate unless Samus has the Space Jump, meaning a glitch will have to be performed on the other side of the room leading to the Screw Attack in order to access it.

An unused version of this room has been found in the internal data of Super Metroid, and it appears in a hand-drawn developer's map of the entire game. While the lower part of the room (under the basin) is identical to the final version, the upper half was originally a slope with steps and three pillars embedded into the ceiling. Samus would enter the lower part of the basin through an open tunnel, and there is no Chozo Statue.

A. CHOZO HELP (pg. 70)
"After Space Jumping over the fiery attacks of the lava room, blast the wall with a Power Bomb, then morph into a ball in the Chozo's hand. The lava drains away."

Notes (pg. 70)
"Bombs will take you down through the blocks to the area before the Golden Torizo's chamber."

HIDDEN STATUE (pg. 44)
"Lay a power bomb and part of the wall will be blown away to reveal a Chozo statue. Change into the ball and move into the centre of its out-stretched hand. The lava should then seep away." 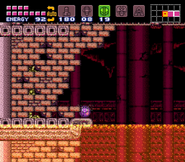 The wall concealing the Chozo Statue. 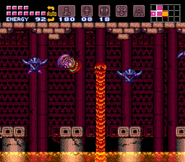 Samus surrounded by the room's creatures. 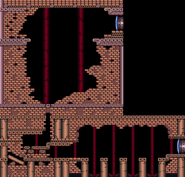 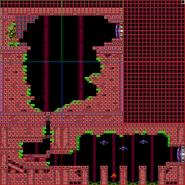 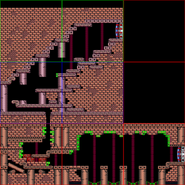 The beta version of this room. 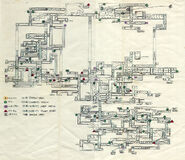 The developer's map, where the beta version of this room can be seen near the bottom.
Community content is available under CC-BY-SA unless otherwise noted.
Advertisement