Adventure Mode (アドベンチャー, Adobenchā?) is a playable mode in Super Smash Bros. Melee. Unlike future installments, there is no inherent story to the mode, and instead merely requires choosing a specific character and difficulty (similar to Classic Mode and All-Star Mode), and then using that character to go across various worlds themed after various Nintendo properties (either being a full level, or otherwise a full battleground, sometimes a mixture of both). Trophies can also be collected during the level portions.

The fourth stage uses as its theme the Metroid franchise, and is devised into two parts: The first part involves beating Samus Aran on Planet Zebes: Brinstar within 4 minutes. Depending on who the player is playing as, Samus will vary in terms of costume. If the player uses any of the characters barring Samus, Samus will be using her default costume (the current Varia Suit). If the player uses Samus, however, the opposing Samus will use her red alternate costume (her missile-selected Varia Suit). The second part involves escaping in a level that is recreated from the Tourian/Crateria portion of Super Metroid within forty seconds. Regardless of whether the player succeeds or fails in reaching the goal in time (unless the player loses their last stock), the player is treated to a scene that is recreated from the ending of Super Metroid showing the destruction of Planet Zebes, only to pan over to Pop Star from the Kirby franchise. Note that escaping in time in the second part is the only way to get the Samus's Starship trophy.

The final boss of the level is a Giant version of Bowser from the Mario franchise, faced on Final Destination. Depending on the mode being played, he'll either use his default colors (Very Easy and Easy Modes) or he'll use his black alternate costume (Normal or higher). In addition, depending on how well the player does and meeting certain criteria (specifically, choosing Normal or higher as the difficulty, and reaching the Bowser boss fight in 18 minutes or less without using even one continue), the player can either end the stage there, or face an additional boss in the form of Giga Bowser. The ending is then depicted as follows: If the player fails to meet the requirements to fight Giga Bowser, it will show Bowser's trophy being knocked into the abyss surrounding Final Destination, with the player character using one of their victory poses (in Samus's case, her second victory pose depicting her spraying five blasts in a panoramic fashion before posing with her arm cannon, all while crouching). If the player defeats Giga Bowser upon fighting him, it shows Bowser's trophy being knocked into the abyss again, only this time it is shown exploding in the distance.

Afterwards, similar to in Classic Mode, it shows the player while falling returning to trophy form before landing on a table showing it and any trophies the player had depicted thus far. Brinstar (Melee) acts as the end music for the mode when playing as Samus.

Afterwards, it shows a Congratulations Screen for the characters similar to Classic Mode after showing a montage of the player character. In the case of Samus, it shows her jumping during the escape level with Code Red flashing in the background. 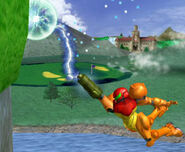