Aeromines are drones used for patrol and combat purposes by the Space Pirates. They are equipped with a powerful shield, but a design flaw prevents them from using the shield and their weapons systems at the same time. This flaw led to the execution of the design team. The Space Pirates planned to correct the flaw, but to date have not. They are often found in groups.

Should Samus come to close to the Aeromines, they will explode as a possible last attempt to defeat her, though the damage is extremely minor.

Aeromines often appear in groups. One or two at a time, they will disable their shield and fire. Simply one shot will eliminate one drone. If the Aeromines become a complete nuisance, Samus may engage Morph Ball and roll to them, as they simply explode dealing little harm to her. 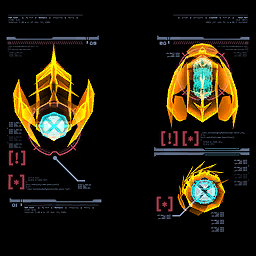 Aeromines suffer from a design flaw--their shield- and beam-weapon units use the same power source, allowing only one to function at a time. This exposes the unit to damage when it fires at enemies. Aeromines were originally designed to take the role of sentry for Space Pirates, but have since been put to use in combat as well. Because of the initial design flaw, these units do not pose much of a threat. After the executions of the first design team, the new pirate designers swore to correct this flaw with great haste.