For other uses, see Aether (Disambiguation).

Dasha region, "on the periphery of Galactic Federation territory", "on the fringe of Federation space," "across the galaxy" from Phaaze[1]

Would have become Class XIII wasteland if not for Samus Aran.

Previously plagued by inter-dimensional electrical storms, these disappeared after the planet's dark dimension was destroyed.

Once a fertile land, the planet is currently recovering from a colossal stellar impact that scorched its forests and plains.

Aether is a rogue planet in the Dasha region of space. It is the home of the Luminoth. Fifty years ago, a Leviathan from planet Phaaze crashed into Aether with unusual force, destroying the planet's natural beauty and bringing with it pure darkness in the form of the Ing Horde and their home, the alternate dimension of Dark Aether. The exact details of the event and how the Dark dimension was created are still unclear; however, it is believed that a combination of the Leviathan's Wormhole-creating abilities, the tremendous power of Phazon and Aether's fragile Light energy resulted in the creation of Dark Aether. The meteor was transported to Dark Aether before impact, causing the crater which scarred a whole face of the planet. Despite there being no sign of the meteor or its mark, Aether itself still felt the force of its impact and bore the signs of desecration.

Since splitting with Dark Aether, the planet became plagued with violent electrical storms in its atmosphere and purple clouds, a direct result of the battle for dominance between the two planets. In addition to creating Dark Aether, the impact left Aether mostly rocky and barren, ruining what had once been a beautiful landscape. A few weeks after the impact, when the Luminoth race which dwelled there eventually emerged from their shelters to see what happened to the planet, they discovered that the meteor was nowhere to be found. The Luminoth then realized the extent of the meteor's consequences, and a war with the Ing that would last decades began. The planet was eventually restored to light by Samus Aran when she visited the planet on a rescue mission of a Galactic Federation squad lost on the planet, near the war's end. Areas of Aether include the Temple Grounds, the Great Temple, Agon Wastes, Torvus Bog, and the Sanctuary Fortress.

The Luminoth had no home planet to begin with. However, after meeting other races (including the Chozo) who had laid claim to a homeworld, they decided to do the same, eventually settling on Aether. Aether, as a rogue planet, had no sun; instead of sunlight, the planet depended on an energy source the Luminoth named "The Light of Aether". The Light was so powerful, it threatened the planet's well-being, and so the Luminoth built the Energy Controllers to channel it. The controllers used the Light to power a teleportation system and weather control grid, in addition to many other Luminoth creations.

Ruin came in the form of a Leviathan from Phaaze, similar to the one that had struck Tallon IV before, except that the Leviathan's Phazon, and its ability to open wormholes, combined with the light of Aether, and caused a secondary dimension in the same place as Aether called Dark Aether, with Phazon flooded in the planetary energy. The impact of the meteor on Dark Aether as the dimension split had caused devastating affects on both dimensions: Agon, which had been a vast plain, became a desert wasteland; and Torvus, which had been a lush forest, was flooded with water. In addition, the pure Phazon energy in the leviathan itself caused the original Aether to split from a new world called Dark Aether, and the Light of Aether was split between the two planets. As the Luminoth lived on Aether, a new race called the Ing was born on Dark Aether, and began invading the Luminoth's world through portals.

In response, the Luminoth developed technology such as the Light, Dark, and Annihilator beams, the Light and Dark suits, portal-opening devices, and light beacon technology that kept them safe from Dark Aether's caustic atmosphere. They also created the Energy Transfer Module, a device meant to take the energy from the Sky Temple's energy controller and restore it to Aether. The team that ventured into Dark Aether retrieved the keys to the Sky Temple, where the Emperor Ing resided, but was then split up and killed, one by one, and the Energy Transfer Module was stolen by the Ing. With the module in the Ing's possession, they launched major offensives into Aether, taking over Agon, Torvus, and the Sanctuary Fortress one by one. Near the war's end, only the energy of the Main Energy Controller in the Great Temple sustained Aether.

Having lost all hope, the remaining Luminoth locked themselves in suspended animation, hoping for a miracle to save them. The current Sentinel of the Luminoth, U-Mos, stayed awake to watch as the Ing approached. U-Mos soon met the Bounty Hunter Samus Aran, and asked for her help in saving the planet.

What brought Samus to the planet was news of a missing Galactic Federation starship; the G.F.S. Tyr, which had disappeared while in pursuit of a Space Pirate ship. The GF force had damaged the Space Pirate ship, forcing it to crash land onto the planet's surface. The GF ship followed, but was damaged by lightning when traveling through Aether's turbulent atmosphere, and made an emergency landing as well. Samus locates these GF troopers and learns this, but they had already been killed by Ing forces long before she arrived. She then learns more of these "Ing", and then sets out on a journey much larger than what she had originally planned: she was to destroy the Ing's dwelling, Dark Aether, by returning "the Light of Aether" back to its rightful place in order to restore the planet to a more stable state.

After this mission was completed, the Galactic Federation came to Aether and collected most of the remaining Phazon from the planet. The Phazon they left behind was collected by the Space Pirates, who also unknowingly picked up Dark Samus. The Luminoth, meanwhile, began the task of rebuilding their planet.

Aether had many unique creatures, some of which are similar to bioforms of Tallon IV and are speculated to be gifts from the Chozo to the Luminoth during their meetings. The planet also had many mechanisms, most of which had gone rogue by the time Samus arrived, and now serve the Ing, and also off-world creatures. Below is a list of every enemy or species encountered on Aether, or mentioned to have inhabited but no longer do.

The area Samus Aran makes planet fall on. In the game Temple Grounds acts as an overworld-type area, linking all of the other areas. It's the area surrounding the Luminoth-built Great Temple.

The barren desert area of Aether. Before the event the Luminoth refer to as the Cataclysm, the Agon Wastes was a lush green field of grass, named the Agon Plains. This area became the location of the Space Pirate mining and lab headquarters. This is also the area where Samus fights Dark Samus for the first time.

This forest area of Aether has turned into a rotting bog after the Cataclysm. It is home to many dangerous creatures, such as the dreaded Grenchlers.

The Torvus Bog is divided into two areas: The upper Torvus and the lower Torvus.

A giant fortress building built by the Luminoth to be the ultimate sanctuary for the Luminoth population. Filled with independent mechanisms and sentry androids, it is a very dangerous area. The Sanctuary Fortress also contains parts of an unassembled Quadraxis, a fully assembled model being taken by the Ing during the war. In Dark Aether, the Ing have claimed the fortress as their "Hive" and have re-built and possessed most of the machines from Light Aether.

QUESTION: How are Light Aether and Dark Aether related?

ANSWER: They are opposite sides of the same coin.[1]

QUESTION: Since there are two [worlds], light and dark, the map is complex yet clever. Was there any confusion during the game’s development?

ANSWER: To avoid confusion, we stuck two different, giant versions of the map on a wall and looked carefully at both, utilizing it as a scheme.[2]

QUESTION: If Aether returns to normal, will it become unmineable since it is only accessible in Dark Aether?

Planet: Aether
Obscure world in the Dasha system.
Planet is unstable due to transdimensional flux. Warfare has devastated a good portion of the world's
population. Finally, extreme climate shifts have left most of Aether uninhabitable. 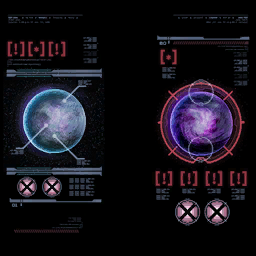 Satellite information shows that Aether is slowly recovering from a cataclysmic event. A stellar object struck the planet with an incredible force, burning Aether's fertile plains and destroying the lush forests covering her surface. The planet's own energy supply, once torn in two by the impact, is now stable. The inhabitants of the world, the starborne Luminoth, have begun the long task of mending Aether.

The scan images of both Aethers have been directly ripped from the cinematics in Echoes, and have a larger palette than most scan images.

Clark Wen had this to say regarding differences in the audio between light and Dark Aether:

On why Retro Studios took the direction of a more linear world with three branching areas by planet, Kynan Pearson said:

The sky above the Temple Grounds in the Metroid Prime 2: Echoes Bonus Disc, with a prominent moon.

The moon, as seen in the Bonus Disc version of the Agon Wastes.