This article is about the cave. For the room in the Chozo ruins, see Alpha Metroid chamber.

The Alpha's chamber[1] is a room in Metroid II: Return of Samus and Metroid: Samus Returns.

The Alpha's chamber is located in Area 2 of SR388, and is explored during Samus Aran's mission to exterminate the Metroids. This chamber is a cave containing one of the Alpha Metroids in Area 2, and is found in the area's lower catacombs.

In Return of Samus, the Alpha's chamber is very similar to many other caves in the depths of Phase 2 and Phase 3, such as the arena area of Chozo base, although this particular cave contains a few minor differences giving it a slightly unique layout. It consists largely of elevated platforms over thick brambles of bushes, with a Metroid Husk resting on a small platform in the center of the cave. The floor is entirely covered with bushes, though Samus can shoot the plants to give herself more safe ground to fight the Alpha Metroid.

In Samus Returns, most likely in order to differentiate Area 2's caverns from Area 1, the red plants in the Alpha's chamber are replaced with water, a substance seen throughout much of the area. The background of this subterranean cave features stalactites and steam geysers, the latter most likely caused by the volcanic caverns directly beneath the Alpha's chamber. When the Alpha Metroid appears, it bursts out of the water with a great splash. While the water hinders Samus's ability to evade the Alpha Metroid's attacks, the sloped rock platforms provide her with dry land to fight upon.

The Alpha's chamber contains a Charge Door leading to the volcanic caverns below. Since these rooms contain extreme heat, the Alpha's chamber is as far as Samus can safely explore without acquiring the Varia Suit from within Area 2's Chozo ruins.

In Samus Returns, once the Alpha Metroid is killed, Samus can return to the Alpha's chamber to find it inhabited by several other creatures native to Area 2. This demonstrates the shifting balance of the SR388 ecosystem: lesser prey are allowed to thrive while the apex predators are driven to extinction by Samus.

ALPHA METROID 11/40 (pg. 80)
"This chamber has a variety of platforms to fight from. Pools of water dot the ground, but the wide selection of platforms means they aren't much of a threat. Fighting from the sloped platform in the center of the chamber works well — it offers plenty of space for you to jump, and since it's higher than most other platforms, evading to another platform is quick and effortless.
Pick whatever location works for you. This is a by-the-books fight, so it should cause little issue."

The Alpha's chamber in Return of Samus 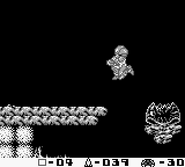 The Metroid Husk in Return of Samus