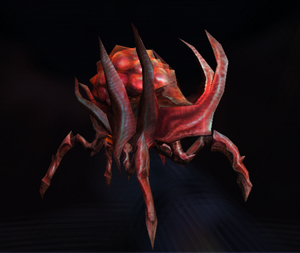 Alpha Hoppers are a larger and more territorial species of Hopper. They share many of the same features of their cousins, but are distinguished by their larger horns and torso, and also by their bright red colouring. Alpha Hoppers are known to make durable Hopper Nests to shelter in.

They are a deep magenta in color, a shade which looks very similar to Red Phazite. However, they are never stated to be adorned as such, and are not implied to be corrupted with Phazon either. Alpha Hoppers are far more resilient to damage than Hoppers, their armored shell possessing much stronger qualities than the rather fragile hide of normal Hoppers. However, they are easily defeated by Hypermode attacks. These creatures live in big nests above ground, and will launch themselves from them if they detect the presence of a threat. Alpha Hoppers are fierce and will attack anything that may harm the nest with their blade-like talons.

Six in three different pairs are fought all at once in Bryyo Cliffside in Metroid Prime 3: Corruption as mini-bosses of sorts, in the room Gateway Hall. 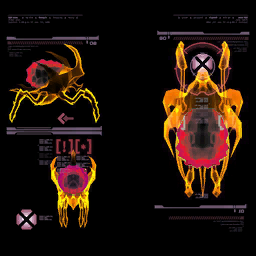 Alpha Hoppers are characterized by their unique color and durable hide. They are highly territorial and will attack any creature who wanders too close to their nests. When hunting in packs, they will often keep their distance while others move in to attack at close range. Like all Hoppers, their legs end in sharp talons and can be used to shred through any prey that gets close enough.

Español
Community content is available under CC-BY-SA unless otherwise noted.