The creature's insect-like appearance is a large departure from its prior and well-known larval stage. This metamorphosis will only occur if a Larva Metroid is inhabiting its homeworld of SR388, or a replica of it. From this stage onward in the species' life cycle, a Metroid can no longer be immobilized with the Ice Beam, but can be damaged and killed with either Missiles or said beam. After an unknown period of time, the Alpha Metroid grows into a Gamma Metroid.

An Alpha Metroid molts from the topside of a Larva Metroid's translucent membrane. The development has granted it new physical features: two red compound eyes, three large fangs surrounding a leech-like mouth outlined with smaller teeth, four budding limbs and a plated exoskeleton growing along the dorsal region. The Metroid now resembles an arthropod, and the species' characteristic membrane and red nucleus are now located on its underbelly. Due to unknown factors related to SR388's environment, a rare mutation can occur in which an Alpha Metroid is covered in a green, moss-like substance while possessing an additional pair of eyes.

The appearance of Alpha Metroids differed in Metroid II and Metroid Fusion. They lack an oral cavity, therefore their three fangs functioned more as a central horn and two tusks. The compound eyes were initially of a blue color. There was also no mutated Alpha Metroids to be found.

Larva Metroids have four nuclei housed within their massive membranes, though they seemingly lose three of these when they become Alpha Metroids, as the latter possess only a single nucleus in their smaller membranes. Due to the fact that a larva leaves an empty membrane behind when it metamorphoses into an Alpha Metroid, it can be logically assumed that the three missing nuclei were re-purposed into creating the organism's new body in a fashion similar to stem cells. The remaining nucleus is carried by the Metroid for the rest of its life cycle.

These anatomical changes have an impact on how the Metroid reacts to its species' major weakness: the Ice Beam. Contrary to a larva who's entire body is frozen solid when fired upon from any angle with the weapon's standard shot, an Alpha Metroid cannot be immobilized by any means. Only its membrane can be encased in ice, which will merely slow the creature's movement and is achievable strictly by shooting its face or membrane with a charged shot of the Ice Beam. The inability to completely freeze its body results from the newly-developed exoskeleton that borders the membrane; the small surface area of the membrane that remains exposed, along with the Metroid's unceasing movements as well as the delay in shooting consecutive charged shots, forces Samus to make precise shots in the heat of battle.

However, an Alpha Metroid's membrane is frail, as it can be readily damaged with either concussive weaponry or the Ice Beam alone, unlike the Larva Metroid's complete invulnerability to weapons unless it is specifically shot with missiles after it is frozen first. In addition, the membrane of the older Metroid remains frozen for a long period of time with a single charged shot when compared to the younger form who unfreezes rapidly, therefore requiring a constant stream of shots to maintain it in ice. This disparity in the membranes' defensive strength is likely determined by the number of nuclei present on their bodies.

The Alpha Metroid is arguably the weakest stage in the SR388 life cycle after the Infant Metroid. However, it is the first crucial metamorphosis that will ultimately allow the creature to reach far superior forms, with much of the weaknesses listed above either diminished or removed entirely.

In Return of Samus, the Alpha Metroid has very basic and straightforward movements, so it does not pose any large threat. Five Missiles will take this creature down. Its only means of attack is ramming, as it lacks the life energy drain of its predecessor.

The Alpha Metroids can perform new attacks in Samus Returns, including attempting to dive-bomb Samus. When preparing this attack, they protect their vulnerable membrane by positioning themselves with their dorsal shell. The attack itself, however, can be parried with her Melee Counter and leave it open for damage. The Alpha Metroids will occasionally protect themselves by deploying a thin layer of electricity (or red plasma energy if dealing with the mutated variants) during their ramming maneuvers, neutralizing all of Samus' attacks (including the Melee Counter) except the Ice Beam. The normal variant can drop from its membrane small electrical spheres which detonate with a small radius; these can be destroyed for pickups. The mutant variety will instead drop large red indestructible plasma spheres that spread out into flames, covering the entire floor or platform it impacts on. These electric and plasma based traits are a precursor to the Gamma Metroid variants which possess extensive control over the elements.

Alpha Metroids are more durable in Samus Returns; the first one encountered takes 10 missiles to kill, and subsequent Alphas can withstand up to 15 missiles, with the mutated variant requiring additional hits. Their high mobility and aggression can make it difficult for Samus to score direct shots with her missiles, but a charged Ice Beam shot into the membrane will greatly hinder their speed and facilitate the next few shots. In addition, encasing their weak spot in ice will prevent the Metroids from deploying their energy barriers and force them to resort to their standard ram, giving Samus an opportunity to Melee Counter. If Missile ammunition is depleted, she can use her Ice Beam to damage the organisms, though it will take more time to finish them off.

In Samus Returns, the first Metroid that Samus encounters is a Larva that has recently drained a green Hornoad of its life energy. As she approaches it, the Metroid sheds its membrane and emerges as an Alpha Metroid, beginning the battle.

In Chozo Memory 08, the once-tame Larva Metroids created by the Chozo to combat the X Parasites were shown shedding their bodies, emerging as Alpha Metroids and turning against their creators. This implies that the Metroids' life cycle on SR388 was either an unintentional trait or the Chozo simply overestimated their ability to control the species as they molted into superior forms. As a result of the Metroids growing out of control, the Chozo brought about the creation and/or release of the Purple liquid, alongside the construction of the Chozo Seals which were designed to contain the majority of the Metroid population deep underground.

"This the [sic] shape of a Metroid after its first molting."

Alpha Metroid (p. 21)
"While Alpha Metroids may be the first “true” evolutionary form of the Metroid family, they’re not as frightening as most Metroids you run into. We label this stage the “awkward teenage years” of the Metroid maturity chain. They feature more attacks than your standard Metroid larva, but their growing carapace means they’re much slower and less aggressive than their younger cousins. They do receive a boost in defensive ability, so the Ice Beam-and-missile trick is no longer viable. That doesn’t mean they’re immune to these weapons, not by a long shot. However, don’t expect to dispatch an Alpha as quickly as you would a Metroid larva. With Alphas and all following Metroid evolutions, you’ve gotta work for your fights." 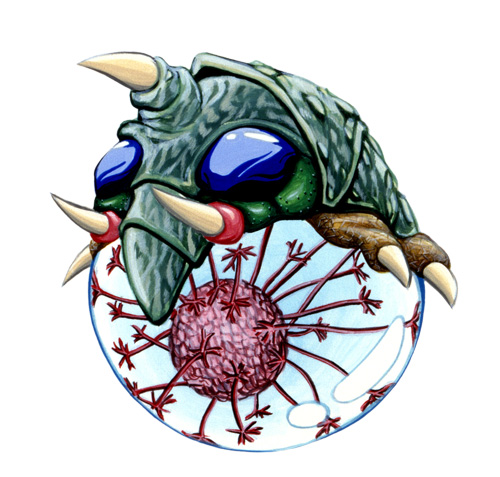 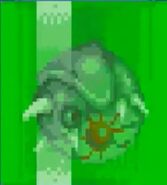 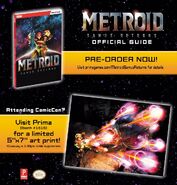 An Alpha Metroid emerging from its Metroid Husk in Samus Returns

An Alpha Metroid after shedding its Metroid Husk in Samus Returns

Close-up shot of an Alpha Metroid's Mandibles in Samus Returns

A shed Alpha Metroid Husk in Samus Returns
Add a photo to this gallery
Retrieved from "https://metroid.fandom.com/wiki/Alpha_Metroid?oldid=234587"
Community content is available under CC-BY-SA unless otherwise noted.