Wikitroid
Register
Don't have an account?
Sign In
Advertisement
in: Pages in the real-life POV, Articles with non-canonical information, Pages in need of images,
and 7 more

Animal Crossing is a series of simulation video games developed and published by Nintendo, depicting the life of a human character in a town of animal inhabitants. It had been created by Katsuya Eguchi in order to explore themes of family, friendship, and community deriving from his experience of moving from Chiba to Kyoto.[1] It was introduced as Animal Forest (どうぶつの森, Dōbutsu no Mori?), a game released only in Japan for the Nintendo 64 without any plans of localizing the game due to it containing Japanese references that were believed to not resonate with Western players,[1] before being ported to the Nintendo GameCube worldwide. Games in the series contain numerous furniture and clothing items to purchase or acquire, some of which reference other Nintendo games, including the Metroid series.

References to Metroid in Animal Crossing[]

Animal Crossing-e Series 2, a collection of e-Reader cards features a card named Samus's Suit. If a Nintendo GameCube Game Boy Advance Cable is used to connect the e-Reader to the game, a pattern can be uploaded to Animal Crossing that gives the player a Power Suit pattern on their shirt and helmet on their hat. The pattern can also be put on umbrellas, floor tiles, and wallpaper.

A Metroid is available as a furniture item, and is acquired randomly after shooting down Gulliver's UFO. It is based on the baby from Metroid II: Return of Samus, Metroid: Samus Returns and Super Metroid, and features it in its signature capsule. There appears to be a stasis liquid in the capsule, although the Metroid is seen moving. When touched, a few seconds of the Title theme of Metroid will play (the Famicom Disk System version).

If the player speaks to Gulliver after repairing his ship, there is a chance he will say "There are plenty of bounty hunters in space. Do you know of one who can turn into a small metal ball? Or the fox like creature who pilots a space craft?" This is a reference to both Samus, who uses the Morph Ball in her series, and Fox McCloud from Star Fox. On a similar note, his riding a UFO in that game called the Porpoise, was an indirect reference to Olimar's spaceship, the Dolphin, in the Pikmin series.

The Metroid item can still be obtained from Gulliver. Copying the player's data from Wild World to City Folk does not retain the Metroid from the former in the latter's catalogue. It now appears to be based on the Metroid's appearance in Super Smash Bros. Brawl as an Assist Trophy.

City Folk also contains two additional items, a helmet named Samus Mask and a T-shirt named Varia Suit. Both are obtained through the Tom Nook Point Tracking System. Similar to the Metroid, both the Samus Mask hat and the Varia Suit shirt resemble their Brawl appearances. The mask can be purchased for 6000 points and the Varia Suit for 5000. The design of the main body of the shirt is partly based on Samus's Suit from Animal Crossing, though it has different sleeves and back as it is a shirt and not a pattern anymore. If both clothing items are worn in conjunction, Kicks the shoe-shining skunk will change the Villager's shoes to yellow if they choose "Go by color" when Kicks asks how the player wants their shoes shined.

The Metroid in City Folk.

Samus Mask and Varia Suit on display in the player's basement.

The Metroid item and Samus outfit return as special prizes, retaining their appearances from City Folk. The Varia Suit is split into smaller pieces of clothing, since New Leaf had added the ability to change pants and shoes. The outfit is assembled by purchasing Fortune Cookies at Nookling Stores. Each article of the suit is categorized into the "rock 'n' roll" style of clothing. The fortunes are as follows:

When the Metroid is touched, it now plays the title theme from Metroid: Other M, along with the screeching of the Baby Metroid from the same game.

Aside from these, three Metroid-related clothing and painting designs were issued via Official Nintendo Magazine as part of Thank KK It's Friday. The first, titled "metroid" was a T-shirt colored black and featuring Samus's Helmet on the front (referring to the opening prologue for Super Metroid); The second, titled "Metroid" (note the capitalized word) and created by Darren Kerwin, was a painting featuring a black background and an 8-bit Metroid; the third, titled "Samus" made by someone with the handle of "Dissidia012", was a painting similar to the one made by Kerwin, although it instead featured Samus in her pose from the continue screen from the FDS version of Metroid as well as the Samus Data Screen in the same game.

The Samus Mask in New Leaf.

The Varia Suit in New Leaf. 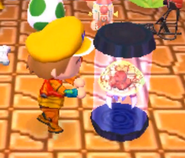 The Metroid in New Leaf. It plays the Other M version of the series theme and Metroid screeching.

The Villager and Samus were two of the first characters confirmed for Smash 4. In his gameplay reveal, the Villager demonstrates his Pocket move by catching Samus's Charge Shot and firing it back at her.

In Super Smash Bros for the Wii U, although not actual allies of Zero Suit Samus, two Villagers acted as opponents to the player (playing as Captain Falcon) shortly after Zero Suit Samus was defeated in the Event Match "Bounty Hunter Clash", with the flavor text indicating that they did so because they intended to challenge the winner of a bounty so they could beat the winner and then make off with the bounty in order to "make a quick buck."

Although he does not have a direct appearance in Dark Samus's debut trailer in Ultimate, his Gizoid attack was seen among the projectiles Dark Samus dodged at Sukuzu Castle.

Although no Metroid characters appear in Isabelle's debut trailer "A Hardworker's Dream", one of the gameplay segments has her using her down smash on Falco as the latter is about to use his Fire Bird attack on Planet Zebes: Brinstar.

In Min Min's debut trailer "Ramen Time!", Villager alongside Zero Suit Samus attempt to attack Min Min at Reset Bomb Forest, although she punches them away. 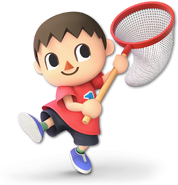 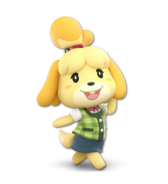