The Aqua Sac is an aquatic plant-like organism encountered in Metroid Prime inside the crashed Frigate Orpheon.

Aqua Sacs appear to be evolutionary counterparts to Sap Sacs. They exhibit a bluish sap, clustered small sacs as opposed to the single terrestrial Sac, and (as the name implies) an affinity for aquatic environments. Unlike the land counterpart, when an Aqua Sap is exposed to enough force it does not explode violently. It only "breaks", so to say, and the pieces simply float from the body of the sac. It provides no threat nor any benefit to Samus. 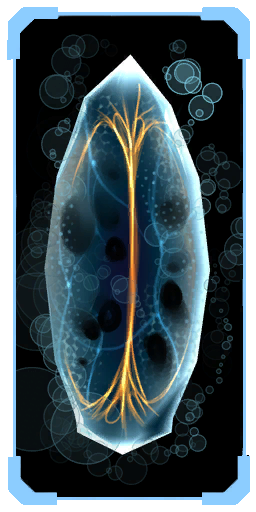 Species: Aqua Sac
Will burst when subjected to impact or trauma.

Believed to be in the same family as the Sap Sac, this plant has similar features. It bursts when exposed to force. This protective response keeps most creatures from feeding on it.

A destroyed Aqua Sac.
Add a photo to this gallery
Retrieved from "https://metroid.fandom.com/wiki/Aqua_Sac?oldid=218718"
Community content is available under CC-BY-SA unless otherwise noted.