The Arboretum is a room in the Chozo Ruins. It appears in Metroid Prime.

The Arboretum is a very large room with a huge Cyrlic tree in the center, around which platforms and bridges lead to the top of the room. Before Flaahgra has been defeated, the water on the floor, while shallow, is poisoned and harmful to Samus; she can move over it using some platforms. Two War Wasp Hives are attached to the tree, and the wasps will attack when Samus gets near. There are four Runic symbols that Samus Aran must scan to access Sunchamber Lobby through the Door at the top. Behind this barrier is a block of Sandstone, which, once destroyed with a Bomb, reveals a Morph Ball tunnel.

A Secret World can be found in this room: [1]

Gate
"This decorative gate is obstructing passage through the doorway. Four runic symbols adorn its surface. Matching symbols within this room must be scanned to gain access here."

Wall
"Walls appear to have been constructed with extreme delicacy around tree limbs."

Top of the room, exit to Sunchamber Lobby 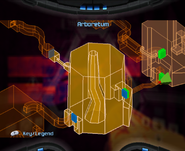 Room seen from the Map.
Community content is available under CC-BY-SA unless otherwise noted.
Advertisement