It is the third area Samus visits on her mission to exterminate the Metroids of SR388.

After the four Alpha Metroids of Area 1 are defeated, the purple liquid drains, giving Samus access to Area 2. The boss Arachnus is also encountered here, disguising itself as an Item Sphere in a room inside the Chozo ruins.

In Return of Samus, the Phase 3 Chozo ruins contain several long narrow vertical pipes, which Samus can climb using the Spider Ball to access different rooms in the complex (such as an Alpha Metroid chamber). The large cavern has a pool of water, which has also flooded some of the lower rooms of the ruins. A pair of Blob Throwers, the only specimens in the game, have taken root atop the roof of the Chozo settlement.

Phase 3 is also home to catacombs very similar to those previously found in Phase 2, which are infested with Metroids and overgrown with bushes; the Alpha's chamber is one such cavern found in these depths. Additionally, some of these caves are filled with sand, which Samus must clear away with her beam weaponry in order to navigate. It is in these tunnels that Samus encounters the first two Gamma Metroids.

In Samus Returns, the area has been turned into what resembles a hydroelectric power station built around natural caverns filled with water. There are large lava and water streams being held back with Chozo technology in the background. The largest room of Area 2 consists of a large water dam, with artificial waterfalls and many stalactites hanging from the ceiling. Area 2 has many underground geysers, and there are many large non-hostile creatures that live in the damp caverns. The lowest points of Area 2 contain many volcanoes that are presumably the cause of these geysers.

In Return of Samus, an ambient theme plays through most of Phase 3, while SR388 Underground plays inside the Chozo ruins.

Met2 Caverns3 is also played in the tunnels and caves of Phase 3, although it will only play if Samus enters the large dome-like cavern through the water-flooded basement of the Chozo ruins. It will continue to play throughout the area until Samus reenters the ruins or returns to the main tunnel.[4] Given the esoteric means of playing this song in Phase 3, it is most likely a glitch.

While it is technically first heard in Area 1, Magmoor Caverns is designated as the theme of Area 2 in the Sound Test because this is the first area that requires Samus to enter superheated rooms, and also the one where she acquires the Varia Suit necessary to do this safely.

A Metroid husk at the entrance to Phase 3 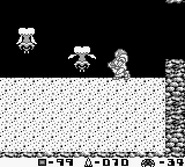 Septoggs in a sand-filled cave in Phase 3 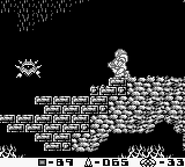 A Senjoo outside the Chozo ruins in Phase 3

Samus inside the Chozo ruins in Phase 3

A Missile Tank in Phase 3

A Blob Thrower in Phase 3

A Metroid husk in Phase 3

A Gamma Metroid in Phase 3

A Gamma Metroid in a sand-filled cave

Map of Phase 3 from Return of Samus

Artwork of the Phase 3 ruins

Chozo scientists discovering Aeion in what seems to be Area 2 in the second image of the Chozo Memories.

An Evolved Alpha Metroid in Area 2

A superheated room in Area 2

Bigbug02 and a Metroid Husk in Area 2

The Gamma Metroid in Area 2

A Fleech Swarm in Area 2

The Alpha Metroid chamber in Area 2

Map of Area 2 from Samus Returns