Phase 5 is the fifth explored area in Metroid II: Return of Samus, and is one of the smaller ones as well, featuring no powerups and only one Gamma Metroid. While exploring Phase 5, Samus must jump on narrow platforms (sometimes above purple liquid) while navigating her way through Octroll territory.

Phase 6 is the sixth explored area in Metroid II: Return of Samus. It is a medium-sized area that splits into two tunnels where Samus can use Flitts to jump across pools of purple liquid, with one tunnel leading left to an Alpha Metroid encounter and the other leading right to another Gamma.

In the remake Metroid: Samus Returns, the two areas are combined and expanded, and now take place in a series of caverns filled with crystals, some of which can even be seen walking around in the background. The Spazer Beam, Space Jump and Super Missiles are all acquired here. After the first Gamma Metroid is killed and Samus drains the purple liquid via a Chozo Seal she will come across a second Seal requiring the destruction of three more Metroids, somewhat similar to the later Area 6.

Ascending an elevator shortly after, Samus comes across a damaged Chozo Statue, with its power-up missing. She is soon accosted by the Diggernaut robot she encountered earlier in Area 3, which chases her through a series of mining caverns until she manages to trick it into believing she is dead. It leaves behind the Space Jump. Eventually she finds another Chozo Statue holding the Super Missile, opening up the path to her first Zeta Metroid.

Map of Phase 5 and Phase 6 in Return of Samus

A Rock Icicle in Phase 5

The Octroll territory in Phase 5

A Moto in Phase 6 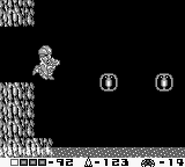 The Gamma Metroid in Phase 6

A possible depiction of Phase 5 in the Japanese commercial

Phase 5 in Nintendo Official Guidebook for Metroid Other M

The Chozo discover X Parasites in what seems to be Area 4 in the fourth image of the Chozo Memories.

Map of Area 4 in Samus Returns

The first Chozo Seal in Area 4

A Mumbo swarm in Area 4

A Gamma Metroid in Area 4

The second Chozo Seal, with purple liquid blocking off Area 5

The ruined Statue apparently destroyed by the Diggernaut

The Zeta Metroid in Area 4

The Alpha Metroid during its Grab Sequence in Area 4

Large purple crystals and a Stronger Gullugg in Area 4

Cubic crystals and geodes in a superheated cavern