Phase 8 is the eighth explored area in Metroid II: Return of Samus, and is very large, having been split into two separate areas in the remake. The section of Phase 8 corresponding to Area 6 is where Samus Aran encounters the last Alpha Metroid. After an earthquake raises the purple liquid level, Samus must backtrack to the room where she killed the Alpha Metroid. There, she fights the first Omega Metroid in the game. There are no items in this area, as Samus should already have collected all of them.

In Metroid: Samus Returns, the area is expanded and now features sandy desert-like locations in addition to the original sections containing purple liquid. The area also contains some ruined structures presumably built by the Chozo and fossils of unknown creatures.

Initially, there is only one Zeta Metroid to be fought here. However, after returning its DNA to the Chozo Seal of the area, the lower half of Area 6 floods with the purple liquid but opens up a new path, to a second Seal requiring one more Metroid. The path continues back around to the upper half of Area 6, where Samus comes face-to-face with the first Omega Metroid.

After destroying it, Samus continues through the caverns and is confronted by the Diggernaut, a rogue Chozo mining robot that she awoke and got chased by earlier. It also stole the Power Bomb from a Chozo Statue prior to this encounter. Samus destroys it in a battle and obtains the only upgrade in this area, the Power Bomb, which did not exist in Return of Samus.

In Return of Samus, the Surface theme is the only music track played in the first half of Phase 8.

Map of the first half of Phase 8 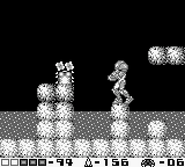 A cavern flooded with purple liquid in Phase 8

Phase 8 in the Return of Samus Japanese commercial

The first Chozo Seal in Area 6

Diggernaut stealing the Power Bomb from its Chozo Statue

The Zeta Metroid hiding in Area 6

The second Chozo Seal in Area 6

The Omega Metroid in Area 6

Concept art of the Zeta Metroid and Omega Metroid nests