Area 7, previously known as the second half of Phase 8[1] (alternatively written as Phase Eight[2]), is the penultimate area on SR388. It is explored in Metroid II: Return of Samus and the game's remake, Metroid: Samus Returns.

Phase 8 is the eighth explored area in Metroid II: Return of Samus, and is very large, having been split into two separate areas in the remake. The section of Phase 8 corresponding to Area 7 is a dark set of caverns featuring odd, solid bubbles akin to those in Norfair on Zebes. It is mainly composed of long vertical shafts (such as the Chozo Tower) and corridors, the latter of which are often lined with spikes. Shallow pools of an unidentified dark liquid (not to be confused with purple liquid, yellow liquid, or water) can be seen exclusively in this area; the liquid itself is harmless, but it often covers a deadly layer of spikes. This is where Samus Aran encounters the three remaining Omega Metroids in the game. There are no items in this area, as Samus should already have collected all of them.

In Metroid: Samus Returns, the remake of Metroid II, the area is expanded and transformed into a laboratory. Like the original area, it contains three Omega Metroids. As Samus obtains her final power-up in Area 6, the Power Bomb (which did not exist in Metroid II), Area 7 contains no Chozo Statues.

In image 5/11 of the Chozo Memories, several Chozo scientists are shown in a laboratory containing a Metroid larva. The picture heavily implies that the Metroids were created in this place. Evidence supporting this includes monitors showing Metroid larvae and X Parasites, and capsules like those in the picture (many of which are broken and covered in webbing), present in the lab. Additionally, the presence of the three Omega Metroids implies that they may have been some of the Metroids created at the facility that matured into their Omega stage.

Sections of the laboratory are cold and are blanketed with sheets of ice. However, these areas are apparently not cold enough to kill Metroids as the baby can travel safely through them, indicating that they may have been used to render the Metroids sluggish. This is similar to how the Space Pirate Science Team built their Glacier One base in the Phendrana Drifts to render their Tallon Metroids sluggish for the purposes of controlling them.

In addition to apparent Metroid research, the laboratory contains a high tech observatory with holograms showing what appears to be the solar system of SR388, similar to that of Tallon IV. Presumably, the facility was the center of scientific study for the Chozo colony on SR388. As a result, the facility contains several robotic security units, namely Autoads, Autracks, Gunzoos, and Wallfires. Furthermore, some bodies of water and pipes added there for unknown reasons can be found at certain parts of the laboratory.

In Return of Samus, a dark and sinister theme plays in the Omega Metroid territory of Phase 8.

In Samus Returns, Chozo Laboratory (designated as the theme of Area 7 in the Sound Test) plays through most of the area. The Area 1 theme plays in the apparent site of the Metroids' genesis, but is replaced with the standard Chozo Laboratory theme after all Omega Metroids in the area have been defeated.

Map of the second half of Phase 8 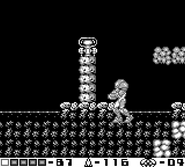 The first Save Point in Phase 8

The Omega Metroid territory in Phase 8

A Metroid husk in Phase 8

An Omega Metroid in Phase 8

Another Omega Metroid in Phase 8

Samus and the baby in the Area 7 observatory.

Red plants and spikes in Area 7

A "bugfly" colony in Area 7

An Omega Metroid in Area 7

Another Omega Metroid in Area 7

The final Omega's chamber
Add a photo to this gallery

Retrieved from "https://metroid.fandom.com/wiki/Area_7?oldid=268546"
Community content is available under CC-BY-SA unless otherwise noted.