In Return of Samus, Phase 9 begins with narrow tunnels winding upward to a massive open cavern. Starting with the liquid-filled hall, these tunnels have pools of an unidentified liquid. If Samus steps in certain pools, she will fall through fake ground and be dragged down to the bottom of the tunnel network. The tunnels and massive cavern is notably devoid of life except for a small number of Septoggs, which can assist Samus traveling to the top; the large absence of biodiversity suggests the Metroids wiped out whatever fauna was once present. There, she will find the apparent ruins of a Chozo settlement littered with numerous glass tubes that imply this may have once been a lab of sorts. There are multiple entrances to the structure, one of which leads to a Big Energy Ball and Missile Battery, another leading to a destroyed Chozo Statue that once held an Ice Beam, and a third entrance bringing Samus deeper into the structure where the Metroid nest is found. A secret exit in the Queen's nest will return Samus to the destroyed Chozo Statue, allowing her to recharge her energy and missiles before returning to the fight.

In Samus Returns, Area 8 is an odd ecosystem containing green webbing and pulsating fungi-like vegetation; a yellow liquid flowing from odd formations in the ceiling; large spikes; and other substances found exclusively in rooms occupied by Metroids. This suggests that Metroids warp their environment to resemble their preferred habitat. Strangely, despite this area being the main hive of the dreaded species, the remake adds a large number of wild animals in its surroundings which seemingly contradict the long-established threat of the Metroids on other lifeforms. Many robots such as Autracks and Gunzoos were also added, potentially hinting on the existing connection between the Chozo and their creations, the Metroids. Glass tubes and temple-like structures can be seen throughout Area 8, strikingly similar to those from the Chozo laboratory in Area 7.

Once Samus enters the Metroid nest in Morph Ball mode, she passes through a narrow tunnel underneath a single Metroid Egg in the Queen's nest, and then her Metroid Detector suddenly reacts to the presence of Metroid larvae. She proceeds to exterminate these larvae and the Queen Metroid itself.

As she leaves the nest, Samus discovers the Metroid Egg and witnesses it hatching, giving birth to an Infant Metroid known as the baby. As it imprints on her as its mother, Samus chooses to take it with her back to the Surface, through a tunnel that gradually shifts from Area 8's aesthetics to the Surface's terrain. As it orbits around her, the baby carves out otherwise-indestructible crystals that block their way, allowing them to reach Samus' gunship; this sets in motion the events of Super Metroid and subsequent sequels. In Return of Samus, the tunnels leading to the ship are empty except for the aforementioned crystals; in Samus Returns, there are many weaker enemies and item expansions along the way.

In Return of Samus, a dark and sinister theme is carried over from Phase 8 and continues to play in the lower tunnels flooded with viscous liquid. Metroid Nest plays as Samus enters the Metroid hive. Once she detects the Metroid larvae and proceeds to hunt them down, Metroid Nest continues playing at a higher pitch. An ambient droning plays in the corridor leading into the Queen Metroid's lair. Met2 Metroid Hatching plays upon the defeat of the Queen Metroid and the hatching of the baby Metroid.

In Samus Returns, the Area 8 theme plays in the lower tunnels flooded with yellow liquid. Metroid Nest starts playing slightly earlier in the large shaft leading to the Metroid hive, but is now replaced by a sped-up techno remix of the Tourian theme once she detects the Metroid larvae. Met2 Metroid Hatching once again plays as Samus and the baby journey through the tunnels leading to the Surface.

Pools of liquid in Phase 9

A Missile Battery and Big Energy Ball in Phase 9

The entrance to the Metroid nest in Phase 9

A Metroid larva in Phase 9 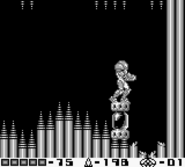 The entrance to the Queen Metroid's lair in Phase 9

The hatching baby Metroid in Phase 9 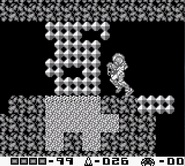 Crystals in the tunnel leading back to Phase 1 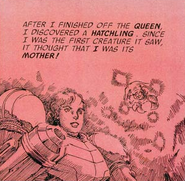 Samus and the baby Metroid in Super Metroid (comic)

Samus and the Metroid egg, as seen in Super Metroid

Samus and the baby Metroid, as seen in Super Metroid

Samus and the baby Metroid, as seen in Metroid: Other M

Samus and the baby Metroid, as seen in Past is Prologue.

Metroid webs and an Energy Tank in Area 8

A pool of yellow liquid in Area 8

The large open cavern of yellow liquid in Area 8

The entrance to the Metroid nest

A Metroid larva in Area 8

A Metroid larva latching onto Samus

A Save Station in Area 8

The entrance to the Queen Metroid's lair in Samus Returns.

Samus lands in the Queen Metroid's domain, with the beast a few feet behind her.

Samus vs. the Queen Metroid

Samus and the Metroid egg

Samus and the baby

Samus and the baby leaving the Metroid nest

The baby eating crystals in Area 8

Waterfalls in the tunnel leading back to the Surface