Arena area of Chozo base

Arena area of Chozo base

The arena area of Chozo base[1] is a room in Metroid II: Return of Samus and Metroid: Samus Returns.

As the name implies, the arena area of Chozo base is a room in the depths of Area 1 beneath the Chozo ruins, and is the setting of a Metroid battle. During her mission to exterminate the Metroids, Samus Aran is required to enter this room and kill the Alpha Metroid that resides in it.

The layout of the room remains almost unchanged between Return of Samus and its remake. It consists of four raised platforms above brambles of red plants. As she battles the Alpha Metroid in this arena, Samus must carefully jump between the platforms to avoid falling into the red plants and taking damage. Although the floor has several safe places to stand in Return of Samus, it is entirely covered with red plants in Samus Returns.

With the improved graphics of Samus Returns, the black background has been replaced with a fully detailed environment, showing beams of architecture presumably supporting the Chozo base directly above. The arena area is coated with Metroid webs, presumably left behind by the Alpha Metroid inhabiting this room.

In Samus Returns, once the Alpha Metroid is killed, Samus can return to the arena area to find it inhabited by Gulluggs and a Gravitt. This demonstrates the shifting balance of the SR388 ecosystem: lesser prey are allowed to thrive while the apex predators are driven to extinction by Samus.

In both games, the arena area of Chozo base connects (via Beam Door in Samus Returns) to a similar corridor featuring raised platforms and red plants.

PHASE 3 CONTINUED (pg. 61)
ALPHA METROID
"Watch for the dangerous bushes as you're going after the Metroid that is holed up in this corner."

ALPHA METROID 3/40 (pg. 54)
"Not much has changed compared to what you faced with the last Alpha Metroid. This one is also electrified. The key difference is that the chamber is layered with health-sapping red plants. If the Metroid body-slams you, there’s a good chance you'll fall right into them. Don't panic. Carefully and calmly jump back on one of the platforms.
Keep yourself centered on the middle platform. This gives you plenty of maneuverability and a clear line of fire toward the Metroid.
You can also move toward one of the outside platforms and wait for the Metroid to perform its electric tackle attack. It's likely to ram right into the wall, which prevents it from performing subsequent tackle attacks as it normally would. Plus, with the Metroid momentarily staggered, you have a brief window of time to fire at its core.
Either strategy works, so feel free to experiment. Keep an eye out for those electric charges, electric orbs, and the counterable tackle." 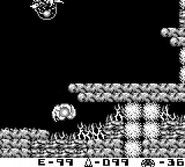 The arena area in Return of Samus

Concept art of the arena area