Samus Aran's Arm Cannon is her primary weapon, capable of both shooting energy-based beam attacks and ballistic Missiles. The Arm Cannon, as its name implies, is affixed to the Power Suit's right forearm.

What separates the Arm Cannon from other firearms is its ability to access various weapons systems by quickly changing its configuration, thus eliminating the need for multiple (and sometimes bulky) guns such as weapons mounted on the Federation Force's Mechs and Anthony Higgs' Plasma Gun. For example, during her mission on Tallon IV, Samus could switch between four beam systems (excluding the Phazon Beam), Missiles, and four Charge Combos for the beams. Despite its complexity, the Arm Cannon in Metroid Prime 3: Corruption and all games in the 2D Metroid series is unable to switch between the beams collected throughout the course of the game. Instead, they stack, resulting in a Power Beam that gains more power and new attributes as more beams get added. By default, Samus' Arm Cannon always features the Power Beam.

Interestingly, much of the technology Samus Aran uses, including her Map and Metroid Detector, seems to be mounted along the Arm Cannon as suggested by various cutscenes in Metroid Prime and Metroid: Samus Returns.

In addition to beams and missiles, the Arm Cannon can also be used as a melee weapon as shown in Metroid: Samus Returns and Metroid Dread via the Melee Counter during which Samus swings her Arm Cannon.

The Arm Cannon is also shown to have many other functions, such as uplinking with computers or other systems, welding, melee combat, and controlling Samus' Gunship. In the Prime series, it is occasionally shown to have colored buttons on the inside of the left round section when it flips open (this may represent the canonical way Samus changes beams). The Arm Cannon can also be picked up and thrown by smashers in Super Smash Bros. Brawl when Samus sheds her Power Suit as part of the three pieces it leaves behind. The Arm Cannon's three rings are shock absorbers to deal with recoil.

In Metroid: Other M, the exterior of the Arm Cannon has two green circles. In Samus Returns and Metroid Dread, there are glowing patterns on the arm that change color depending on the beam equipped, matching them.

The inside of the Arm Cannon is more simplistic and is simply a long, narrow tube with some sort of trigger mechanism at the end, into which Samus inserts her hand. It can only be seen when using the X-Ray Visor because other visors cannot look through the solid Arm Cannon. The opening scene for Metroid: Other M shows what the inside of the arm cannon's barrel looks like and what happens when a beam is fired, and Metroid Prime Trilogy shows another, alternative look during the start-up video and through to the Samus Data Screen.

The Arm Cannon is shown to assimilate weapons from multiple species including the Chozo (who designed the cannon), Alimbics, Luminoth, Phrygisians, unknown species, Space Pirates, and, to a lesser extent, the Galactic Federation. Below is a list of these weapons.

Use by individuals other than Samus Aran[]

Though Samus's Arm Cannon is of Chozo design, other species (as seen in Metroid Prime Hunters) have created their own arm cannons with identical functions, some likely inspired by the bird race's. After the malevolent Gorea steals the six Affinity Weapons from their respective Bounty Hunters, it manifests two organic arm cannons in order to use the weapons on Samus during the first phase of the boss battle between the two. Gorea can also swipe at Samus with these arms if she comes too close.

Dark Samus uses an organic version of the Chozo's Arm Cannon, created from Metroid Prime's essence fusing with Samus's Phazon Suit; it can fire many of her weapons, with a few being Phazon-based. Largely thanks to it being an X-Parasite born from infecting Samus's power suit, the SA-X was also shown wielding the Arm Cannon, also having access to its full weaponry, notably including the Ice Beam. It also spawned multiple versions of the Arm Cannon when mutating during its final encounter with Samus Aran, although it was left unclear whether they were usable due to the mutated SA-X preferring to pounce on her.

The violent leader of the Mawkin tribe of the Chozo, Raven Beak, uses an Arm Cannon as one of his main weapons. He notably used it to kill the surviving Chozo of the Thoha tribe, as first seen in the final image of the Chozo Memories in Metroid: Samus Returns. He later uses the Arm Cannon during both of his fights with Samus during Metroid Dread. During their first encounter in the game's opening, Raven Beak uses it to obliterate the entrance to a large Chozo monument right behind her and later prepares to shoot Samus point-blank after placing her in a neck-lift. The Mawkin Robot Chozo Soldiers use Arm Cannons as well. A flashback in the scene just before the final battle with Raven Beak indicates that the reason Samus is able to use her arm cannon was because she was infused with his Mawkin genes. One of the Chozo Archives also implies that Raven Beak's arm cannon was potent enough in terms of firepower to effortlessly leave an E.M.M.I. severely damaged.

An essential part of SAMUS's POWER SUIT, the ARM CANNON is UPGRADABLE and adaptable to other weaponry. To fire the weapon, press the FIRE button, Switch weapons by tapping the weapon icons at the top of the touch screen.

The Arm Cannon is Samus Aran's primary offensive weapon. Built into the right arm of the Power Suit, the Arm Cannon is upgradeable with a variety of weapons, including the Wave Beam, Ice Beam, and others. When used in combination with secondary weapons such as missiles, the Arm Cannon can become a devastating offensive tool."

ARM CANNON
"Unlike many first-person titles that require you to exchange one weapon for another, all of Samus's attacks are contained in one compact unit: the Arm Cannon.
The Arm Cannon can switch from one weapon to the next with a simple flick of the C Stick. In the scene above, Samus is attacking an enemy with the Wave Beam.
Another Arm Cannon upgrade is the Ice Beam, which freezes some enemies solid with a single blast and eliminates some others."

"Samus’ right arm is completely integrated with her powerful and iconic Arm Cannon, which can fire two types of weapon: rapid-fire beam attacks and powerful missiles. Because the Arm Cannon is so deeply integrated, Samus can toggle between weapon classes at will.

In the Metroid Dread game, you can attack from nearly any angle while running, jumping, or holding on to certain walls and ledges."

Beam Attacks
"The beam attack is Samus’ go-to offensive ability. Acquiring upgrades can modify its power and properties, like increasing the attack’s spread or adding other functions."

"One such functional upgrade is the Grapple Beam, which lends it a rope-like quality that makes the Arm Cannon capable of connecting to specific points. Once connected, Samus can tow objects or swing herself to otherwise unreachable parts of the environment."

Missiles
"Unlike the endless wave of beam blasts at her disposal, Samus has a capacity limit for this compact yet powerful heavy weapon. It, too, can be enhanced with ability upgrades. Samus can increase her missile capacity—thus being able to hold more—by acquiring Missile Tanks and Missile+ Tanks scattered throughout the world. Search with diligence!"

~Transmission from the Dev Team~
"Each attack can be done while running or jumping. In the Metroid: Samus Returns game for the Nintendo 3DS™ system, Samus had to plant her feet to Free Aim and fire—now, you can aim forward in a wide range of angles while running. This makes it easier to attack from a distance while on the move.

In the Metroid Dread game, most actions—like Arm Cannon attacks and Melee Counters— can be performed from nearly any position. We wished to emphasize the player being able to maintain their speed and momentum at any given time, aiming to make the flow through different types of gameplay feel as seamless as possible."

Nintendo of America
"Samus' Arm Cannon can switch between two weapons at will: a beam that can be fired in rapid succession, and powerful missiles.

In #MetroidDread, you can freely shoot at various angles while running, jumping, or holding onto walls.

Nintendo of Europe
"Samus’ trusty Arm Cannon is her go-to weapon when dispatching enemies. She can use it to shoot rapid-fire Beam blasts or powerful Missiles from various angles, even when she’s running or jumping. #MetroidDread"[3] 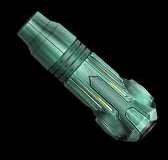 The cannon's control panel in Prime.

If left idle long enough, Samus will hold the Arm Cannon like this in Prime.

The cannon's control panel in Echoes.

Another idle pose has the sections of Samus' Arm Cannon split, as if she were charging, before she lowers it. This also occurs in Corruption after she interacts with an object as well (see here). 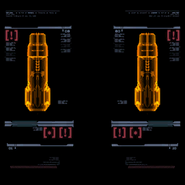 Scan images for the Weapons Inventory category in Corruption.

Final image of the Chozo Memories

Samus using the Arm Cannon as a melee weapon while performing a Melee Counter in Metroid: Samus Returns 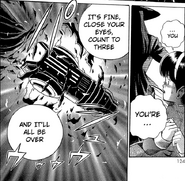 Samus manifesting her Arm Cannon independently of her Power Suit in Metroid: Volume 2.