Wikitroid
Register
Don't have an account?
Sign In
Advertisement
in: Articles with non-canonical information, Humans, Alive,
and 7 more
English

Armstong was once saved by Samus Aran in an asteroid field and has since desired to be her partner. He uses a type of Power Suit which is blue with a black visor, and appears more bulky, although it is said in the comics that it possesses lower shielding and the inability to recharge energy.

Houston barely does any fighting and is only around to collect bounties such as Space Pirate claws, but he does warn Samus of danger and cheers her on. He seems sort of desperate to be her partner, although that was remarked after a barb from Samus that all he cares about are bounties, and not eliminating the threat of the Space Pirates.

When Samus was injured, he questioned why she wanted him to take her to unknown coordinates, but followed through on her request as he was presumably confident she knew what she was doing. He landed on a desolate planetoid inhabited by Old Bird. An unconscious Samus was looked after by Old Bird, who was trying to surmise what went wrong. Since Houston delivered a wounded Samus, Old Bird assumed he could be trusted, and told the story of the fall of the Chozo, the death of Samus' parents and how she was trained to be a fighter. After Samus was healed, Houston seemed to be a more seasoned bounty hunter, having better understood Samus' backstory and the plight of the Chozo. He would not relent in his attempt to become Samus's partner, however.

Houston's gunship is a blue vessel similar to Samus's iconic Gunship, but with a round top and a tan underbelly. Houston uses it first to follow Samus to Ceres, and then escape with her before its destruction. When Samus's Power Suit is damaged, he uses her gunship to reach the Nest rather than his own. As he is escaping Zebes, the rescued Chairman Keaton and Chief Hardy board his ship. 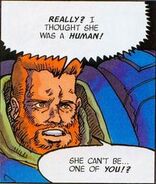 Houston in a Blood of the Chozo excerpt written by Jippykid, featured in Nintendo Power