The Artifact Temple, also referred to as the Cradle in Chozo Lore, is a room and important location in the Tallon Overworld region of Tallon IV. It appears in Metroid Prime. Created by the Chozo who colonized the planet 50 years prior to Samus Aran’s arrival, it was created to contain the spread of Phazon on Tallon IV, with a cipher sealed by 12 Chozo Artifacts. The Temple was later unlocked by Samus to confront the Metroid Prime, the source of Phazon on the planet.

The Artifact Temple also has its own unique theme music.

The prosperous Chozo colony on Tallon IV prophesied their own destruction, foretelling that "the Worm" would threaten them, and that "the Hatchling" (Samus) would come and encounter this Worm.

This prophecy would later came to pass when Tallon IV was struck by a Leviathan. When it made contact, local flora and fauna were horribly mutated, and the environment itself became poisoned. The Chozo attempted to seal away the Leviathan, along with the Worm, constructing the Cradle over it. However, despite their efforts, the Phazon brought by the Leviathan had already poisoned their world. Even as they finished the Artifact Temple, the Chozo were soon driven mad from Phazon Fever. The Worm, however, was successfully detained in the Impact Crater below the temple, as the poison the Leviathan carried continued to spread across Tallon IV. Samus learned of the prophecy through Chozo Lore and set out to fulfill it.

After discovering the twelve Artifacts hidden by the Chozo across the planet, Samus returned them to the Temple, activating the Chozo Totems and unlocking the seal. However, as the temple began to unlock, Meta Ridley attacked Samus and started destroying the totems. The Artifact Temple then became the arena for an intense battle between Samus and her cybernetically reconstructed nemesis. After she severely wounded him, the power of the temple itself finished the job, striking Meta Ridley with several simultaneous beams of red energy. As Ridley plunged down to the Impact Crater below, the Chozo Ghosts that had dwelled within the twelve totems completed the process of unlocking the Seal, allowing Samus to proceed into the Impact Crater below.

The subsequent battle between Samus and the Metroid Prime led to the collapse of the Impact Crater, which spread up to the Artifact Temple as well. Barely managing to escape from the Crater, Samus leaped from the Temple's main platform onto her Samus Aran's Gunship, and mournfully watched the Artifact Temple burn from atop her ship with her helmet removed.

The top of the room curves out in paths leading left and right. The right corridor leads to indestructible debris, while the other corridor goes outside of the shelter to the main portion of the temple. The Chozo Lore entries "Prophecy of Light" and "Contain" can be scanned on the top floor. In the middle, a green visor-like window reveals the temple outside.

The actual temple leading to the Impact Crater is a large, ornately carved stone circle with twelve Chozo Totems arranged concentrically and a unique, central totem holding the Artifact of Truth. The Chozo Totems can be scanned for hints to the artifacts' locations and when an artifact is returned, the corresponding totem will light up as will glowing lines connecting the totems on the floor.

The Chozo Statues that attacked Meta Ridley can be seen above the platform. The Chozo Lore found at the Artifact Temple, "Statuary", implied that they acted in response to him willfully destroying the Chozo Artifact holders while the temple was preparing to open the way to the Impact Crater.

Artifact of Truth
The first Chozo Artifact is located in the middle of the room, underneath the central Totem.

Samus in the Artifact Temple 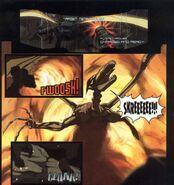 Meta Ridley is struck by the combined power of the Chozo Statues.

Samus watches as Ridley falls into the crater.

Samus ascends to the Temple after escaping the Impact Crater.

Samus jumps to her ship as the Crater collapses.

The Temple in flames.

Samus leaves Tallon IV, her mission complete.
Add a photo to this gallery
Retrieved from "https://metroid.fandom.com/wiki/Artifact_Temple?oldid=280109"
Community content is available under CC-BY-SA unless otherwise noted.