The Artificial Passage is a room in Ridley's Lair/Ridley. It appears in Metroid and Metroid: Zero Mission.

This room is a tall shaft found in the west end of Ridley's Lair. In both games, it features an upper walkway with an Energy Tank, and a drop in front of it to a floor below.

In the original game, the upper half of the room is constructed out of metal bricks. The Energy Tank is found in front of the left door. Directly in front of it is a gap in the floor, an illusion that can dupe Samus and cause her to fall to a much lower floor with no way back up, except to backtrack through multiple rooms. The lower area is constructed out of red and burgundy-colored bricks, with a square-shaped raised section in the middle. This is suspended over a body of lava, which cannot be reached. To obtain the Energy Tank, Samus must carefully jump over the gap.

In Victory Techniques for Metroid, (on pages 124 and 125) Samus enters the room and comes across the Energy Tank in front of her. Excitedly, she rushes forward to it, and humorously falls through the drop. The guide recommends that she jump over after crossing the seventh block in the floor. At the bottom of the shaft, Samus says she will have to take a detour, but it is fine as her goal is to defeat Ridley.

In Zero Mission, the bricks in the upper half of the room now have a smoother, mauve and purple appearance, and the drop is concealed behind an illusory floor. The raised section at the bottom of the (shorter) shaft is now a dark pink, with parts of the walls being purple. The lava is also absent. Unlike in the original Metroid, there is no door on the bottom right, and it is possible to get back up to the top of the shaft via the Turbo Bomb and (later) the Space Jump. It is also possible to grab the upper ledges, making it much easier to go across the top floor of this room.

PERILOUS PITFALLS (page 42)
"In the bridge area to the left of the entrance to this hideout is a hidden pitfall. The stones look solid, but they aren't. An energy tank acts as a lure to draw you in."

Page 125
"There is a pitfall in the artificial passage with the energy tank!! After seven blocks, jump with all your might, or you'll fall in!!"

026 UNDER, NOT OVER (pg. 134)
"On your way to the left side of the hideout, you'll find a long hall that ends with a tall pole. Instead of trying to jump over the pole, find a place near the right end of the hall where you can blast your way into a hidden passage that runs parallel to the floor. You'll roll right under the pole and find an Energy Tank in the next room. Jump over false blocks as you approach the tank."

157 energy tank (page 63)
"An Energy Tank sits on the left side of a small chamber. If you attempt to run to the tank, you'll fall through a hole in the floor and have to work your way up a neighboring shaft to get to the upgrade. Run four blocks in to the middle of the room, then jump. You'll grab the edge and snag the tank." 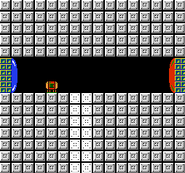 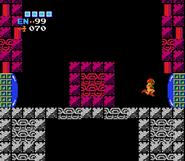