Assault Aerotroopers represent the best of the Aerotroopers in the Space Pirate military. They are equipped with Missile-deflecting armor and upgraded weaponry. However, Beam weapons can damage the armor. This is one of the most difficult Space Pirate units to face, due to its target-breaking dodge combined with armor that makes homing Missiles ineffective. It is equipped with a Twin Remote Attack Pod system rather than the bulky pack system seen on Aether. The pods make use of Particle Cannons and Gel Bomb Racks for their main attacks. The system allows for a greater maneuverability, and can break a target lock from Samus. If the armor is knocked off with hypermode, they will become ordinary Aerotroopers.

Only the best can join the ranks of the Assault Aerotroopers. Heavily armored, they are resistant to most weapon systems. Their unique armor is able to deflect all Missile attacks, but can still be damaged by Beam weapons. Like regular Aerotroopers, they wield two Remote Attack Pods in combat, One is equipped with a Particle Cannon, the other with a Gel Bomb Rack. Gel Bombs stick to their targets until detonation. High-velocity movement can remove Gel Bombs. 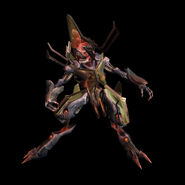