Asteroids are recurring objects within the Metroid series of games. One asteroid was constructed into a lair for Mother Brain and named Metroid, during the events of the Nintendo Comics System and Captain N: The Game Master. SR388 has a nearby asteroid belt that claimed Samus Aran's Gunship and nearly killed its owner. A space station in the same system, the Biologic Space Laboratories research station, appears to have been a hollowed out asteroid, and it was set by Samus to collide with SR388, decimating all life on the planet. The Ceres Space Colony also has a nearby asteroid belt, and some asteroids can be seen in Metroid: Other M cutscenes. In the Metroid Prime room Exterior Docking Hangar, asteroids float around in the air, and can be shot and destroyed. In Metroid Prime 3: Corruption, cel-shaded asteroids can be seen floating around in space through the cockpit of Samus' Gunship at the beginning of the game. In the same game, Leviathans are beings sent from Phaaze to collide with planets in an attempt to corrupt them with Phazon. In Blood of the Chozo, it is said that the True Chozo use a massive asteroid ship as their main base. 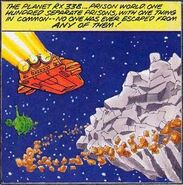 RX 338 also has an asteroid belt

Metroid Prime 3: Corruption
Add a photo to this gallery
Retrieved from "https://metroid.fandom.com/wiki/Asteroid?oldid=259829"
Community content is available under CC-BY-SA unless otherwise noted.