Aurora Unit 217 is a Galactic Federation Aurora Unit. Aurora Unit 217 was assigned a male persona. He was originally designed to support GF Naval Base Demeter, though was assigned to SkyTown shortly after the Treaty of Elysia was signed. He acts as SkyTown's administrator, directing the mechanoids on the planet. 217 has delivered a large amount of tactical intelligence, along with valuable stellar and interstellar research data. He works well with the Elysian mechanoids and enjoys the productive working arrangement he has with them.

When Elysia was corrupted by a Leviathan, AU 217 was infected with the corruption virus. Samus Aran used the Galactic Federation vaccine on the Aurora Unit, but Ghor arrived and damaged the Circuit boards that were vital to Aurora Unit 217 functioning properly. The circuits were later welded by Samus with the Plasma Beam after she defeated Ghor in battle.

After Samus repairs 217's connection to SkyTown, Aurora Unit 242 immediately contacts 217 about the impact of a Leviathan Seed. He quickly formulates a plan to destroy the Leviathan's protective shield so that Samus can help stem the tide of corruption on Elysia. 217 locates the pieces of a disassembled Theronian Bomb on SkyTown and calculates that a thermonuclear explosion would destroy the shield itself as opposed to destroying the generators. 217 then helps Samus acquire the Ship Grapple Beam by giving her a hint as to the location of an item that will help her progress back on a planet she previously visited.

Despite heavy Space Pirate forces on Elysia who try to destroy the Spire Pod that houses the bomb, Samus drops the Spire on the Leviathan shield. After the Shield is destroyed, the AU thanks Samus and then becomes dormant to acquire new data for the remainder of the game.

Later on, it is 217 who discovers hidden Chozo artifacts on Skytown, and informs Aurora Unit 242 so that Samus can access the rest of the Pirate Homeworld.

After Samus has annihilated the Pirate Homeworld Seed, 242 reveals that 217 has continued the works of The Searcher on Elysia, and reports that he has discovered the epicentre of the Leviathan attacks. 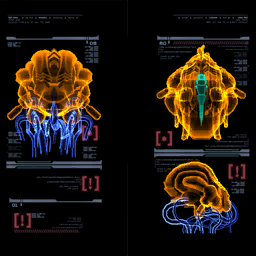 Aurora Unit 217 was originally built to support GF Naval Base Demeter, but was assigned to SkyTown base shortly after the Treaty of Elysia was signed 14 years ago. 217 has served admirably in its role as SkyTown administrator. Vast amounts of tactical intel have been delivered from SkyTown under AU 217, along with valuable stellar and interstellar research data. It has interfaced well with the Elysian mechanoids and enjoys a productive working arrangement with them.