Wikitroid
Register
Don't have an account?
Sign In
Advertisement
in: Featured articles, Articles with non-canonical information, Characters,
and 9 more
English

Interior organs and a scar located beneath the Unit.

An organic supercomputer originally used to assist and interface with the crew of Federation starships, Aurora Unit 313 was stolen by Space Pirates from the G.F.S. Valhalla,[1] under the orders of Dark Samus. As it was being ripped from its chamber in the Valhalla, 313 left behind a final message to the Federation detailing its abduction. It was taken to Phaaze, where it was implanted into the planet and corrupted by Phazon. Seemingly as a result of Phaaze being a living organism, coupled with the Space Pirates' expertise in bio-technology, the organic supercomputer became symbiotically linked with the planet. Through the usage of AU 313 within the Sanctum, Dark Samus was able to control Phaaze, allowing her to systematically launch the Leviathans toward targeted planets at will.[2] Aurora Unit 313 also infected several of its fellow AUs located in Galactic Federation territory with a virus via their shared digital network, forcing the organization to shut down their systems and leave their territories vulnerable to an attack by the Pirates.

After Dark Samus is defeated by Samus Aran on Phaaze, the former merges with the Aurora Unit, forcing Samus to battle against it. To destroy it, Samus must first attack the open holes from which its tentacles emerge in order to stun it, then open the hatch on its head with the Grapple Lasso to reach its core and overload it with Phazon energy. Once this is done, the cable connecting it to the ground will break and reveal its weak point. It will fly around the arena during this part of the fight. At this point, Samus must attack the weak point where the cord once was.

Once Samus destroys it, Dark Samus is finally defeated. The destruction of the Aurora Unit begins a chain reaction, caused by the symbiosis of Phaaze and the AU, that ultimately culminates in Phaaze exploding.

313 also appears in a Diorama in the game's Extras menu. (See Gallery) 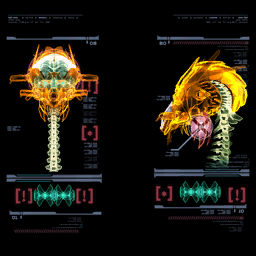 Severed cable has exposed a weak point that is vulnerable to attack.*

Aurora Unit 313 has somehow been fused with the bioessence of Dark Samus. While combat shields protect most of the unit, a weak spot has been detected at the cable junction. Damaging the unit's core will expose this point, but the core itself is protected by an armored hatch. Tentacle ports can be damaged to initiate stunning cerebral-feedback pulses within the target. While incapacitated, the hatch will be unprotected and able to be pulled open. This unit has been heavily mutated by Phazon exposure. It appears to be symbiotically connected to the planet Phaaze as well.

* When cable has been severed.

GFDF AU-313
Before its abduction from the G.F.S Valhalla, Aurora Unit 313 was in service for twelve years. Available data indicates that the unit is out of order, and was possibly involved in the corruption of the Aurora network. 313 has always shown a satisfactory performance during its career, however, there were concerns about its unusually high aggression potential. As one of the few AUs, 313 was awarded the medal of honor. After the bridge crew fell during the Battle of Horus IV, it assumed command of the Valhalla. Without this fast action, the battleship would have been lost.

On the G.F.S. Valhalla, there is a Key Code terminal in the Control Room of the flagship that displays a message from the invasion of the Valhalla. This message can only be seen by entering the Access Code "78356". This code can be seen on a PDA device belonging to a deceased Federation Marine in the same room. The Aurora Unit 313 describes how the Federation were unable to repel the attacks of the Space Pirates upon the ship, and how 313 was forcefully taken from the Valhalla. Near the end of the transmission, 313's voice fades, as it is somehow shut down. With its last words it reveals the Pirate's intentions for stealing the Aurora Unit:

"Data log entry 2467.3. This will be the last communication of the G.F.S. Valhalla. Our efforts to repel the Space Pirate boarding force have failed. They have successfully removed the primary mounting structure around our stasis tank. It is obvious now that they intend to extract us from the Valhalla. It is vital that the Federation receive this transmission.
...Severing main power...
A large bioform is creating a wormhole...
...Implant into...
Sentient planet which is the source of all Phazon.
...Darkness coming."

The AU 313's hologram message, as seen on the G.F.S. Valhalla

Samus uses the Grapple Lasso on the stunned Aurora.

The AU's brain is exposed to Samus's Hyper Missile.

The AU crashes to the ground

The dying Aurora begins to shrivel and shrink

A Diorama featuring AU 313 on Phaaze