The BOTTLE SHIP (ボトルシップ, Botoru Shippu?) was a decommissioned space facility. This "derelict space station" at Cosmos region A47 was the setting of Metroid: Other M.

Samus Aran entered the station after her gunship received a distress signal from it codenamed "Baby's Cry". She explored the ship and encountered the Galactic Federation 07th Platoon headed by Adam Malkovich. The group defeated the Brug Mass and then split up to explore the rest of the space station.

The BOTTLE SHIP was surrounded by space dust, making the station look as if it was destroyed and effectively adding to the abandoned/derelict atmosphere created by the ship.

The ship was later revealed to be a secret facility of the Galactic Federation containing many different lifeforms with the purpose of turning them into bioweapons as well as breeding an army modelled after the Zebesian Pirate forces. The program was falsely indicated under Adam Malkovich's name. The facility eventually abandoned the Space Pirate-inspired army after the crew managed to breed a Queen Metroid and propagate Metroids in Sector Zero and interfaced with them via an A.I. in an android body named MB. The A.I was modelled after Mother Brain's and was able to communicate with Metroids through telepathy. However, at one point, MB went rampant and controlled the Space Pirate Forces to murder every Lab Worker except Madeline Bergman, the development director who hid in Room MW of the Bioweapon Research Center. The rogue android, claiming that all humans must be "judged" piloted the ship on an intercept course with the Galactic Federation as an attempt to attack and destroy it, but this plan was crushed completely when Samus and Adam intervened.

Shortly after Samus left, the Federation decided to destroy the BOTTLE SHIP. Samus returned to retrieve Adam's helmet and escaped suitless from the exploding ship. When Samus first met MB (while she posed as Madeline Bergman), she had a vision of weapons being fired at the BOTTLE SHIP, creating a much more violent explosion than what is depicted in-game. Interestingly, this "vision" plays if Samus fails to escape in time.

It would seem that some of the specimens from the BOTTLE SHIP were transferred to the Biologic Space Laboratories research station and reappeared in the sequel, Metroid Fusion. This transfer would most likely have taken place when The Colonel and his soldiers arrived on the ship. Among the specimens that were moved were the Zebesian Pirate forces and the bodies of Ridley's clone and Nightmare.

The BOTTLE SHIP likely refers to a Ship-in-a-bottle which consists of a model vessel assembled in a transparent glass bottle. This could be a reference to the feeling of entrapment or possibly to the mechanical puzzle aspect, in which the initial reaction to the object is a sense of confusion in regard to how the ship could have been placed into the bottle. These are commonly assembled, piece-by-piece, within the pre-made glass container. Or it might also refer to the ship's actual appearance, which is that of a sports or baby's bottle, where the "ringed" section represents the nozzle, and the larger section the container.

The BOTTLE SHIP being in the shape of a baby's bottle may also play into the theme of the baby's cry and possibly be a source of irony as the "Baby's Cry" distress signal came from within the baby's own bottle. Connecting to this theme, the BOTTLE SHIP houses MB, designed by the Federation to act as a nurturing mother figure toward the Metroids onboard.

The BOTTLE SHIP contains many different species of creature. While many are well known by Samus, there are many that are new to her as well. Most of the life forms were brought from Zebes. There are also several harmless species that are stored in the ship that serve no major role.

"A distress signal known as a "Baby's Cry" drew me to this facility, which is listed as decommissioned. Its purpose is shrouded in mystery, although it's clear that its original design was to sustain and study life-forms in a variety of environments. Something has gone terribly wrong in this place." 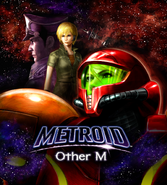 The BOTTLE SHIP in space