Bayonetta (ベヨネッタ, Beyonetta?) is a hack and slash video game series developed by PlatinumGames and published by Sega and Nintendo. Its two games center around the titular protagonist Bayonetta, an initially amnesiac witch with four guns and the ability to slow down time, who battles the angelic forces of Paradiso. While the first Bayonetta game was originally released on Xbox 360 and PlayStation 3 (and later Microsoft Windows), Nintendo stepped in to fund the sequel, which was released exclusively for Wii U and later ported to Nintendo Switch. Because of this, Metroid has been able to have crossovers with the Bayonetta series. In the Wii U and Switch versions of both games, Bayonetta can wear a costume based on Samus Aran. Samus, Zero Suit Samus, Ridley, Dark Samus and Bayonetta also appear together as playable characters in Super Smash Bros. for Nintendo 3DS and Wii U, and Super Smash Bros. Ultimate.

A costume, or Couture Bullet based on the Power Suit's design in the original Metroid game can be unlocked and worn in Bayonetta and Bayonetta 2, and is called Galactic Bounty Hunter. When worn, Bayonetta or her friend Jeanne will fire shots from an arm blaster rather than her Scarborough Fair/Love is Blue guns or other weapons, similar to the Arm Cannon. In Bayonetta 2, the outfit replaces Bayonetta's Panther Within ability with the Morph Ball, which has the ability to lay Bombs when she jumps in ball form. When Bayonetta jumps in bipedal form, her second jump becomes a rapidly spinning and lightly damaging Screw Attack. The Bomb explosion, shot firing and charging, Screw Attack and releasing charged shot sound effects are ripped directly from Super Metroid.

The costume can be purchased in-game in Bayonetta 2 for a number of Halos, while it is unlocked by default in Bayonetta. The visor can be raised and lowered over Bayonetta's face in the first game in gameplay and during cutscenes by pressing down on the D-Pad, but not in the second, although in the second it will lower over her face during a verse, rising again after. This is similar to Samus's visor turning opaque while exploring the BOTTLE SHIP and engaging in combat in Metroid: Other M.

The costume was designed by PlatinumGames artist Yong-Hee Cho, who also designed costumes based on Peach, Daisy, Link and Fox. He enjoyed designing Galactic Bounty Hunter the most due to his love for mechanics. His first design, which based the outfit off of the Metroid: Other M Power Suit, was viewed as too "contemporary" by the director Hideki Kamiya, and requested it be based off of Samus’s suit in the original Metroid. This was somewhat of a challenge for Cho, who had to study the in-game sprite and package artwork.[1] The Morph Ball's appearance is still similar to Other M, however.

The costume is also included in both games' Nintendo Switch ports. While still unlockable through its previous means, it can now be unlocked using amiibo as well.[1] The Samus and Zero Suit Samus Super Smash Bros. amiibo, as well as the Metroid: Samus Returns Samus Aran amiibo, all unlock this costume.[2][3] The amiibo must be used from an option in The Gates of Hell, the in-game bar and shop. When any of the Samus amiibo are scanned, the store manager and bartender Rodin will leave a message saying "Hey, got somethin' here from the toughest bounty hunter in the galaxy. You know I love a badass with a big heart... Or was it the other way around? Might have to whip somethin' up for her someday."

At the beginning of both games, the cutscene before the first battle shows Bayonetta's dress being cut off of her body by an Angel's weapon, leaving her nude until she summons her outfit. While most of the outfits are seen materializing onto her body; the Galactic Bounty Hunter and other Nintendo costumes appear on her body instantly, without materialization. This is more than likely due to Nintendo's sensitivity to risqué imagery, especially when it concerns their characters.

"The power suit of the famed galactic bounty hunter.

With its beam-firing Arm Cannon, this suit is everything a girl needs to overcome inhospitable alien terrain.

Press [Y] to fire the Arm Cannon and hold it to shoot a Charge Shot.

Bayonetta was revealed as the final DLC character in Super Smash Bros. for Nintendo 3DS and Wii U during the Final Video Presentation on December 15th, 2015, and released on February 3rd, 2016. She was declared the winner of the Smash Bros. Fighter Ballot as the highest voted character in Europe, and among the top five in North America. This made her the most “realizable” of characters that could feasibly be included in Super Smash Bros. Bayonetta appears alongside fellow Sega protagonist Sonic the Hedgehog, and was the second character to originate from an M-rated video game series (after Konami protagonist Solid Snake in Super Smash Bros. Brawl). Samus is featured in Bayonetta's reveal poster on the official website. Mostly because of Smash 4 being geared to a much younger audience than her home series as well as the strict guidelines of the CERO rating system,[6] Bayonetta's Final Smash, where she summons Gomorrah, is significantly toned down in the former game (in the original game, in addition to her hair surrounding her, her clothes disappear during the summoning sequence, while in Smash 4, she summons Gomorrah while still retaining her clothes).

In her reveal trailer, Bayonetta can be seen dodging a Side Smash from Samus, and then countering. Prior to her appearance, Pit manages to KO Samus, when Palutena warns him not to get careless, as a challenger (Bayonetta) is approaching.

Although Bayonetta herself does not appear in Ridley's debut trailer A Piercing Screech, her home stage, Umbra Clock Tower, briefly appears during the gameplay portion where Ridley uses his Standard Air Attack on Pit from Kid Icarus. 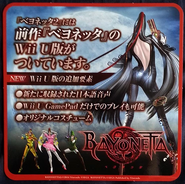 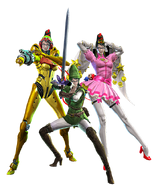 The Galactic Bounty Hunter costume alongside the Mushroom Kingdom Princess and Hero of Hyrule costumes, based on Peach and Link.

A demonstration of the charging ability.

The visor lowered over Bayonetta's face.

Jeanne wearing the costume in the Bayonetta extended credits on Wii U.

Bayonetta and Jeanne wearing the Galactic Bounty Hunter costume, with their hairstyles from Bayonetta.

With their Bayonetta 2 hairstyles. 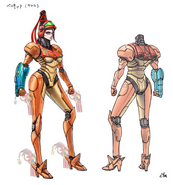 The first concept image, where the suit resembled its appearance in Metroid: Other M. 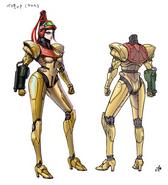 Concept art of the finalized design, resembling the Metroid suit. 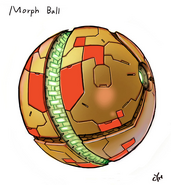 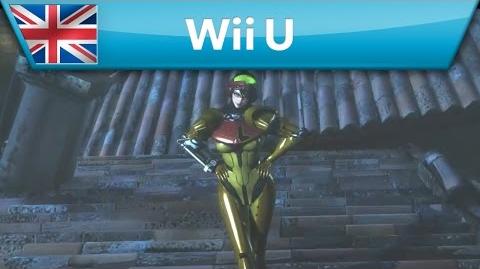 The Samus Aran amiibo and Galactic Bounty Hunter costume in a trailer for Bayonetta 2 on Switch.

Retrieved from "https://metroid.fandom.com/wiki/Bayonetta?oldid=274611"
Community content is available under CC-BY-SA unless otherwise noted.