Sprout worked alongside Matt Manchester for the Metroid Prime 3: Corruption project. His works include textures (patterns) for the GFS Olympus, Norion, Bryyo, SkyTown, the Space Pirate Homeworld and Phaaze. He also created the skins and textures for a Mogenar-class War Golem and the Aazelion in a Drop Shaft on Phaaze. He also drew several concept drawings for the aforementioned Mogenar Unit and several doors, showing how they would function. 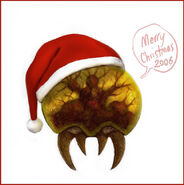