The Berserker Lord is a boss in Metroid Prime 3: Corruption. It is the first boss that Samus Aran faces in the game, on the G.F.S. Olympus. Another is faced later into the game on Eastern SkyTown, Elysia. The Lords are very similar to the Elite Pirate and Ingsmashers, playing the same role in terms of gameplay.

A Berserker Lord is a Berserker Knight that has survived further corruption with more Phazon than what Knights can usually tolerate (similar to the Omega Pirate compared to Elite Pirates). It is possible the Berserker Pirates are the result of improved experimentation following Project Helix.

When first encountered, while Samus is heading back to her Gunship, a yell is heard and a Federation Marine's body is thrown out of a window. The Berserker Lord jumps down and attacks Samus. Samus commands her Gunship to fly into a safe spot while the two fight in an electric cage. After Samus defeats the Lord, it stumbles back into the electrical fence in a dazed stupor, electrocuting it before falling to the depths of space only to be rammed into by a Space Pirate fighter ship, killing both the fighter's pilot and the Berserker Lord itself.

The second Berserker Lord appears in Eastern SkyTown, Elysia, most likely to prevent her from retrieving the First Bomb Component. When defeated, it merely dissolves into ash and dust like normal enemies.

When Samus battles it on the G.F.S. Olympus, she must first fire at two large, red circles on its shoulders. The Berserker Lord attacks with by spitting a stream of blue Phazon as well as pummeling her with punches and shockwaves. If Samus enters Morph Ball mode, the Lord will either attempt to grab her and proceed to smash Samus into the ground, or suck her into its mouth and spit her out. Once they are destroyed, it will fire purple projectiles at her which Samus must shoot at. This will cause them to fly back to Berserker Lord. However, at some points, it may trick Samus by firing red projectiles that cannot be reflected. When enough of the projectiles have hit the Berserker Lord, the Phazite plating on its head will be destroyed, and Samus can fire everything she has at the now-exposed weak point. When enough damage is done, it will stumble into an electrical fence and fall into space, being hit by a Space Pirate fighter ship, blowing them both to smithereens.[1]

In the battle on Elysia, the Berserker Lord's Phazite plating is far more resilient, but the creature has no new attacks. Instead, the only changes in its attack pattern is that this Lord may fire the red projectiles in tandem with the purple ones. Also, if Samus tries to release the First Bomb Component, the Berserker Lord will use its shockwave attack, resetting the switches. 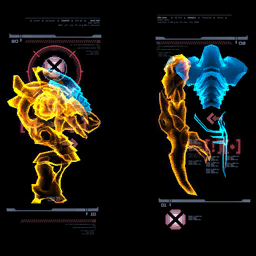 Morphology: Berserker Lord
Phazite plating on its head can only be destroyed by projectiles it fires.

Berserker Lords are highly resistant to damage. Their shoulders are the only unprotected area vulnerable to standard weapon fire. Their main defense lies in their head-mounted Phazite plating, which can only be destroyed by the projectiles it fires. Berserker Lords are a desperate measure, designed to exploit Phazon as much as possible. The few Berserker Knights that survive the highest level of corruption are promoted to Lord status. Lords are distinguished by their ornate Phazite plating and the Phazon reserves they carry on their backs.

Samus about to battle Berserker Lord.

One of Berserker Lord's projectiles.

Berserker Lord's liquid-like substance which it fires from its mouth.

The Berserker Lord battle on Elysia.

The innards of the Berserker Lord. As viewed with the X-ray Visor via hacking.

The Berserker Lord's Introduction on the Olympus.