The Big Metroid[1], also known as the Giant Metroid[2][3] (unofficially called "Super Metroid" by fans), is an anomaly in the Metroid life cycle featured in Super Metroid and briefly seen in a flashback from Metroid: Other M. The anomaly consists of a Metroid larva growing to gigantic proportions without undergoing any other major physiological changes.

Normally, when a larva is located outside of the environment of SR388 (the species' homeworld), the different atmosphere, climate and possibly the lack of Aeion energy halts the Metroid's natural life cycle and the creature is never able to metamorphose into the Alpha stage or any of the subsequent ones. However, an unnatural mutation occurred with Samus Aran's baby (the last surviving Metroid from SR388) when it was stolen and brought to planet Zebes by Ridley. The hatchling was restricted to its larval stage, but increased dramatically in size.

This abnormal growth never occurred with other Metroid specimens in Tourian fought in Metroid or its remake, Metroid: Zero Mission. However, a similar mutation was depicted in the gamebook Metroid: Zebes Invasion Order called the M=M.

Having gained four additional (albeit smaller) nuclei over the usual three, the giant Metroid had grown powerful enough to not only feed on common and enhanced lifeforms, but also immensely dangerous "boss" characters such as a Torizo and Mother Brain herself.

Its flying speed was far greater than that of a typical Metroid and could quickly catch up to prey such as Samus regardless of distance between them. Once it latched onto her, the Giant Metroid was impossible to remove due to its acquired immunity to Bombs and Power Bombs; in fact, the mutant was invulnerable to all of Samus' weaponry, including the Ice Beam (the Metroid species' usual weakness). Its leaching attack had also increased exponentially, allowing it to absorb entire stocks of Energy Tanks within seconds. Samus only managed to survive its attack due to the Metroid voluntarily releasing its grip when it recognized her, leaving her with a single point of energy. Mother Brain, however, was not only capable of returning to life after being fully drained by the Metroid, she also possessed enough power to harm it. The mutant was ultimately killed with one of Mother Brain's standard attacks in Super Metroid; in a flashback of the same battle in Other M, it appears to have been killed by Mother Brain's Laser Brain Attack instead.

Interestingly, despite having mutated, the Metroid retained its ability to willingly transfer life energy from one being to another. It did so by injecting the energy it leeched off of Mother Brain into a gravely wounded Samus, curing the latter of all injuries. Through unverified means (heavily implied by Metroid: Other M to be from its particles), it also gave Samus the Hyper Beam.

The cause behind this mutation is never explained in-game. In the Super Metroid comic, Armstrong Houston suggests that the creature was heavily exposed to Beta-Rays which resulted in its unnatural size increase; since the baby was the only existing Metroid during Super Metroid's events, it is probable that the Space Pirates resorted to using an excessive amount of beta radiation to produce a satisfying amount of Metroids, thus mutating it. This would also explain why the specimens featured in Samus's Zero Mission did not turn into Big Metroids despite being exposed to Beta-Rays: the Pirates began their project with several Metroids from SR388, therefore avoiding the over-saturation of a single specimen.

An alternative explanation may be hinted at in Other M, where Samus states that only special Metroids have the specific genetic coding to become Queen Metroids, whose life cycle has never been shown in its entirety. Based on the revelation that the Queen featured in the same game was a clone created from the Baby's DNA, it may be possible that the Big Metroid anomaly is in fact a stage that only occurs in a Queen's life cycle.

Matt Manchester, an environment artist for Metroid Prime 3: Corruption, wrote design notes explaining why the Metroid increases in size, but they are not considered canon as they did not make it into the final game due to text length limitations: "Observations of captive Metroids display a rare anomaly in their developmental growth. Approximately .08% of contained specimens never reach the biological process that leads to their otherwise natural metamorphic stages of maturity. While developmental stages are stunted, physical growth continues at a congruent rate. Efficiency of energy consumption increases steadily as well. During behavioral analysis, greater intelligence and problem solving skills are observed. Heightened abilities of energy consumption make this anomaly a potential key in isolating and duplicating their feeding process artificially." In his notes, he considered placing a Big Metroid in a containment in Metroid Processing, though this never came to fruition: "In one chamber, I wanted to put a fat giant metroid, like in the end of Super, and then tie in an explanation as to why some Metroids (like the one in Super) get really big in their larval state, but others evolve into more adult forms. Again, none of this is canon by any means, but just the fiction I wrote for myself when making the room."

The battle between Samus and the Big Metroid is scripted in the game. As mentioned before, it is invulnerable to all of her weapons and it is programmed to chase her at an incredible speed and weigh her down as it drains energy off of her, preventing her from leaving the room where it is "fought". It cannot kill Samus since it is also programmed to stop exactly when one unit of her energy remains, leaving her exhausted. The Big Metroid recognizes her, and flees in shame.

However, it is nevertheless possible to "defeat" this creature: Samus can successfully evade the Big Metroid's persistent chase and leave the room using quick maneuvering of her jumping abilities without triggering the mentioned cutscene (a popular tactic among speedrunners). However, if the Metroid is latched onto Samus as she exits the room, she will be glitched in the form of incredible slowdown in her movements, exactly as if the creature was still weighing her down. Another glitch that can result from having the Big Metroid latch onto Samus before leaving its room, is the heroine being frozen in her exhausted animation, unable to recover. Therefore, these glitches force players to reset their consoles.

The spinoff title also featured Big Metroid larvae, however the manner in which they attained their gigantism differed greatly. Prior to the events of both Metroid II and Super Metroid, the Space Pirates possessed a device called the Amplification Beam. This beam allowed them to increase the sizes of their own kind and various specimens to massive proportions. Among the latter were Metroid larvae encountered on planet Talvania, which had grown large enough to latch onto the Federation Force's piloted Mechs.

Despite the Metroids' similar size to the giant featured in Super Metroid, the former were far weaker. The Metroids exposed to the Amplification Beam kept their vulnerability to cold temperatures. Additionally, those that were frozen could be killed with the Mechs' standard beam fire. All of the Metroids featured in-game were exposed to the Amplification Beam, with the sole exception being the one hatched from its egg by Sylux in a secret post-credits scene. 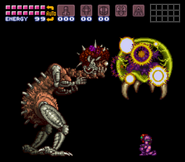 The Big Metroid explodes as it dies in Super Metroid

The Big Metroid in Other M 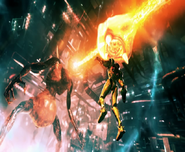 The Big Metroid killed by Mother Brain in Other M

A Big Metroid attacking a Pirate in Federation Force