Encounter with the baby

The "Big Metroid's room" is a room in Tourian. It appears in Super Metroid. In this room, Samus comes face to face with the baby, now grown beyond its normal size, for the first time since its abduction.

This is a long corridor set in the "barren wasteland" area of Tourian. The ceiling is constructed out of a green material, with the same material used in a partially constructed floor. The rest of the floor consists of patches of hard sand. Along the floor are silo-like objects and patches of dark yellow grass or weed. Extending into the background are larger silos, with a dark burgundy hue. There is no door on the other side; the next room is entered through a gap in the wall. This gap is covered by barnacle-like material that has formed in a slight, forward arc.

Along the ceiling and floor are brittle husks of specimens otherwise not seen in Tourian, including two Skrees, two Rippers (one of which is on the floor and angled upwards), two Geemers on the ceiling, and one Sidehopper on the ceiling.

When Samus enters this room for the first time, the door locks behind her. She can choose to destroy the husks if she wishes by shooting or touching them; doing so causes them to disintegrate. Curiously, they are immune to Power Bombs. As she continues forward, the screen stops moving and a Blue Sidehopper emerges. After it hops around for a few seconds, a Metroid of massive size appears and completely drains the Sidehopper of its energy, turning it into one of the husks. It then sets its sights on Samus.

If it catches her (see below), the Metroid begins to drain Samus's energy until it suddenly stops with only a single point left. The Metroid - who was known to Samus as the baby - rises, recognizing Samus, and screeches before fleeing, apparently out of shame. Once it leaves, Samus stands up and can continue to the next room. An Energy Charge connected to this room allows Samus to completely restore her health.

It is possible, but very difficult to avoid being ensnared by the baby, or to escape while it is draining Samus's energy. Through a series of well-timed jumps, Samus can escape the room before the baby catches her. If she is caught close to the exit, she can still leave the room, with the Metroid attached, before her energy is reduced to one point. However, doing so causes Samus's movements to be slowed until the game is restarted from a Save Station, as the game still thinks the Metroid is grabbing her. If she loses all of her energy and transitions to the next room, Samus will be stuck in her exhausted animation and unable to move, forcing the file to be reloaded.

BLAST THE BARNACLES
"At point A, and beyond point A, you will encounter areas that are encrusted with an extremely odd barnacle-like material. The substance may have been secreted by some vile life form, but it's not really clear why it exists. To clear a path and get through it, just blast it."

HATCHLING HIJACK
"When you reach point B, a giant Metroid, presumably the hatchling that you rescued in an earlier Metroid adventure, attaches itself to you and begins to suck away your energy. For some reason, it leaves you with one Energy unit, lets you go, and takes off."

Enter the Hatching! [sic]
"At some point during your search of Tourian, a giant Metroid sucks all but the very last point of your energy. There seems little that Samus can do..." 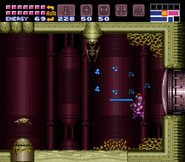 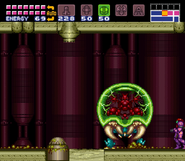 The Metroid attacks the Sidehopper.

The room, as seen in SMILE
Community content is available under CC-BY-SA unless otherwise noted.
Advertisement