Bigbug01 is the internal file name for a massive, slug-like creature in Metroid: Samus Returns. It is one of two creatures with the internal designation "Bigbug", with the other appearing more extensively throughout the game.

This large creature appears in the sidescrolling background of the first desert-themed room (outside the purple liquid caves) in Area 6 on SR388. The creature slides slowly through the background and eventually disappears behind the rock walls. It appears to be a massive, slug-like creature, with several large spikes on its head and smaller one down its backside. It also has a single yellow eye.

It is never directly encountered by Samus Aran and she is unable to physically interact with or harm this creature even with Power Bombs. This may suggest that the bioform is not hostile despite its large size. The creature is one of several that are original to Samus Returns and did not exist in Metroid II: Return of Samus, due to that game's lack of detailed backgrounds.

Despite its large body and sluggish speed, this specimen seem to have somehow managed to avoid predation by Metroids. As it is not encountered anywhere else, it is unknown if there are others of its kind on SR388. It presumably became extinct following the collision of the Biologic Space Laboratories research station with SR388 at the end of Metroid Fusion.

The creature's eye is visible from this angle 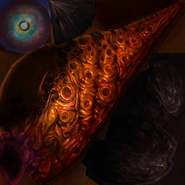 Bigbug01 textures.
Add a photo to this gallery
Retrieved from "https://metroid.fandom.com/wiki/Bigbug01?oldid=275055"
Community content is available under CC-BY-SA unless otherwise noted.