Biostorage Station is a room in the Agon Wastes. It appears in Metroid Prime 2: Echoes.

It is where Tallon Metroids are bred, and on later visits they escape. The room has two floors, connected by an elevator. There is a small containment facility on the top floor where three Metroids are kept, and feed on a Space Pirate corpse (although the Pirate may not be dead, as scans state that it is routinely drained of its energy, not completely dead), these are the only ones that do not escape. On later visits, Infant Tallon Metroids populate the room, and several Metroid Cocoons hang from the ceiling.

The Dark Aether version of this room was the Feeding Pit.

Metroid in container
"Bioscan complete.
Containment field is keeping Metroid subject in a constant state of agitation. It is unable to enter sleep cycles."

Metroid 1
"Bioscan complete.
Metroid subject has several blast wounds from Space Pirate weaponry on low-power settings. They wanted it alive after they were finished with it."

Metroid 2
"Bioscan complete.
Metroid subject is suffering from food poisoning. It has ingested several pet treats and Space Pirate rations. These do not agree with its digestive system."

Metroid 3
"Bioscan complete.
Metroid subject has been energy-drained repeatedly over the last 3 cycles.
Subject's cellular structure has become unstable as a result."

Metroid 4
"Bioscan complete.
Metroid subject is heavily scarred. Wounds appear to be from repeated contact with its containment field, most likely received while attempting to escape."

Space Pirate
"Bioscan complete.
Evidence of symbiotic bonding present in subject's system. Subject is barely alive, and is periodically leeched of its bioenergy by Metroids."

Space Pirate Logs (The Hunter)
"Log 06.362.2
Samus Aran, the accursed Hunter, has arrived.
The sudden arrival of the Hunter is stange enough, but her actions are stranger still. She does not seek our destruction, but our Phazon. With each raid, she steals Phazon ore, only killing those who attempt to deny her. What she needs it for we do not know - though Science Team suspects she requires it to power her new armorsuit. Dark in color, it is equipped with strange new weapons. The troops now call her the "Dark Hunter." It is a fitting title."

This room contains a rather unusual game crash. To activate it, Samus must avoid this room completely and kill Dark Samus via Sequence Breaking. If this room is then entered for the first time after Dark Samus is defeated, once the Tallon Metroid breakout begins, the Tallon Metroids will almost immediately ignore her and hover towards the area with the scannable computers, unleashing their signature energy-siphoning lunge at said area. Within seconds after execution the game will crash and the system will reboot itself.

The lower section of the room

The elevator after being activated 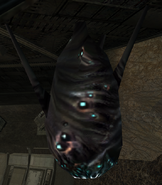