Birds are a recurring species of creature in the Metroid series.

A large type of bird appears in Metroid Prime high above certain areas in the Chozo Ruins and Tallon Overworld. While their distant silhouettes are all that can normally be seen in-game, they have dark blue bodies, pale heads and cyan eyes. They cannot be scanned, but they can be shot at. Once hit, they explode in a puff of feathers. In the game's data, they are referred to as "Tweety", likely a reference to Tweety Bird.

These birds have an unused death animation where instead of exploding into feathers, they fall spiraling from the sky in a similar manner to the ducks in Duck Hunt. (Samus would later appear with the dog, a duck and the shooter from Duck Hunt in Super Smash Bros.) 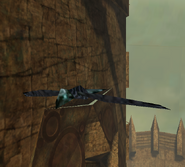 A similar species can be seen high in the skies of the Temple Grounds. Unlike the birds seen on Tallon IV, these are indestructible, and are extremely slender in shape. Animation titles refer to them as "Sandlands Birds".

Retrieved from "https://metroid.fandom.com/wiki/Bird?oldid=269842"
Community content is available under CC-BY-SA unless otherwise noted.