The three blades (刃?)[1] on the left arm of the Fusion Suit are one of its most significant physical features.

Concept art of the Fusion Suit in Metroid Prime indicates that the blades can be retracted and tucked against the arm, allowing Samus to freely move her arm without fear of causing unintentional harm. Samus is never seen fighting with the blades during her mission on the Biologic Space Laboratories research station.

In Metroid Fusion and Metroid Prime, they are purely cosmetic in nature, but there has been much speculation as to their purpose and meaning.

The blades have been compared to a Metroid's "teeth", or the mandibles through which they siphon a bioform's energy. This theory is supported by the Fusion Suit being a reconstruction of Samus Aran's damaged Varia Suit after the exterior of it had to be surgically removed while she was infected by the X Parasite. She was cured using a vaccine made from the baby's cell culture, giving her Metroid DNA and characteristics along with it. Other elements of the suit are similar to a Metroid, such as the three diodes on the back, which resemble a Metroid's nuclei.

Interestingly, certain Chozo Statues seem to have feathers running along their arms in the same manner. It is possible that the blades may be some sort of attempt by the Federation surgeons who constructed the Fusion Suit to add something that holds sentimental value for Samus, since she had lost one of her last connections to the Chozo race. 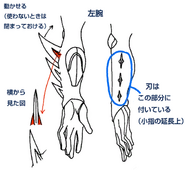 Concept Gallery artwork in Metroid Prime, detailing the blades and their function.
Add a photo to this gallery

Retrieved from "https://metroid.fandom.com/wiki/Blades?oldid=259717"
Community content is available under CC-BY-SA unless otherwise noted.