Blast Shields[1], also known as Locked Doors[2] and Shield Doors[3], are shields or locks placed over doors throughout the Metroid Prime Trilogy.

These are completely invulnerable to any weapons fire. They are commonly used to contain enemies or other threats, and do not open until the threat is removed or when another task has been completed. Sometimes, a Door can become permanently shut with a Blast Shield, forcing Samus Aran to find an alternate route.

They are replaced by Sealed Doors in Metroid Prime Hunters, though an object named Blast Shield appears in the Combat Hall room. Their counterpart in 2D Metroid games is the Metal Door, although doors visibly lock during boss battles in Metroid: Samus Returns.

In Metroid Prime 2: Echoes, a locked door can be removed if opened from its opposite side.

Samus Aran's Gunship also has a Blast Shield in Metroid Prime 3: Corruption, which is activated from the inside. If Samus activates it, a Blast Shield locks around the ship's windshield, protecting it.

In the same game, numerous doors in the Pirate Homeworld (such as in the Command Courtyard) seem to be permanently locked and act similarly to a Blast Shield, blocking off access to areas that only Space Pirates seemingly have access to. This may be the Space Pirate version of a Blast Shield, like those found on other planets in Corruption.

In rooms near the Breeding Room in Sector 1 / Biosphere on the BOTTLE SHIP and the main room of the Bioweapon Research Center, there are doors with dull lock colors, that Samus cannot open (although those near the Breeding Room are compromised after MB's death, and MB opens the one in the Center for Samus to access in a cutscene only).

The term "Blast Shield" is also used to refer to other door locks in the Trilogy. These types are made of more fragile materials and so can be removed, unlike the normal Blast Shields. The Blast Shields are color-coded according to the specific concussive weapons used to destroy them. Once the shield is removed, the door within is accessible.

In Echoes, primarily due to design, if a door is covered with a colored hatch (mostly on both sides), opening said door will also remove the hatch on its opposite side (if any). 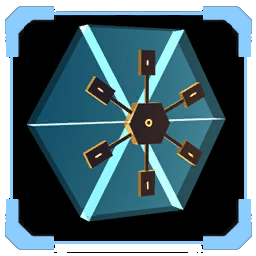 Blast Shield lock engaged.
It is invulnerable to even the heaviest of weapon fire.

Blast Shields are invulnerable to all types of weapon fire. Some are engaged when hostiles are detected and will only open once the threat has been eliminated. Others will sometimes remain shut and force you to find an alternative route.

A Sealed Door on Tallon IV. 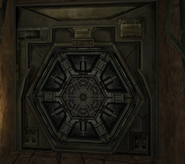 A door lock in Metroid: Samus Returns when Metroids emerge.
Add a photo to this gallery

Retrieved from "https://metroid.fandom.com/wiki/Blast_Shield?oldid=272315"
Community content is available under CC-BY-SA unless otherwise noted.