Tallon IV
The Blastcap is a mushroom-like plant which is native to the planet Tallon IV. They can be found in the Tallon Overworld and Chozo Ruins areas. They resemble large, capped mushrooms of varying size, with twisted stalks and green tendrils underneath their porous caps.

The spores of the Blastcap can survive in outer space, and have propagated throughout the galaxy by means of traveling on interstellar solar winds. This has resulted in the species traveling as far as the Tetra Galaxy, where it has colonized Alinos and Arcterra. The Blastcaps found on Arcterra are simpler in structure, lacking the tendrils of their Tallonian counterparts and having a red spot in the center of their caps. However, the lingering cloud left by these Blastcaps is more dangerous, and capable of even harming armored individuals. . 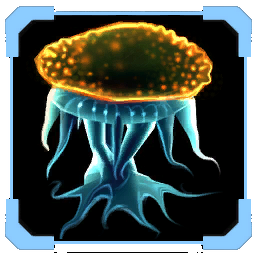 Frost Labyrinth
Add a photo to this gallery