A Blob Thrower is an odd creature native to SR388 in Metroid II: Return of Samus and Metroid: Samus Returns resembling a massive flower. It spits out blobs[2] (renamed Blob Swarms[1] in the remake) that will harm Samus on contact. The Blob Thrower itself is sessile; its main stalk is embedded into the ground by vine-like roots, though it can extend and contract it in order to launch its projectiles at varying heights.

Blob Throwers are only found on top of an ancient Chozo building in Phase 3.

The blobs themselves are blue in color and they each feature what appears to be a green eyeball, heavily implying they are living organisms as well. They flutter in the air for several seconds before eventually disintegrating; they have no visible means of flight in their artwork, though their in-game sprites show what seems to be a pair of petals on their bodies, one on each side. It is unknown if the blobs are part of the Blob Thrower's method of reproduction, or simply creatures that live in symbiosis with the flower and act as the latter's defenses. The game's Virtual Console manual refers to the blobs as "dangerous offspring", implying that they are some variant of the former, similar to spores or pollen.

To kill the Blob Thrower itself, Samus must fire from above at the orifice in the center of the flower. If she does not possess the High Jump Boots, it is preferable for Samus to wait for the Blob Thrower's stalk to contract, bringing the flower closer to the ground. Some timing is required, as the creature increases its height often and her weapon fire can hit the blobs instead. Alternatively, if the Wave Beam is equipped, she can fire from various positions; the beam's helical trajectory massively increases the odds of hitting the Blob Thrower's weak point. The Spazer Laser Beam also works well for this. The Blob Thrower frequently yields large Energy Capsules when destroyed.

Blob Throwers return in Metroid: Samus Returns, a remake of Metroid II. They are present in Area 3 and Area 5. The creatures extend themselves up to the ceiling, blocking Samus's access if it is low enough. They can only be destroyed with the Beam Burst or Power Bomb. The Blob Throwers' projectiles, now named Blob Swarms, had their designs changed to resemble four winged-insects with compound eyes and small mandibles. When Samus approaches one, the flower releases Blob Swarms that actively pursue Samus and swoop down to attack her.

Blob Swarms also appear in Area 4, Area 6, Area 7, and Area 8, but no Blob Throwers are found nearby. This suggests that the Blobs can survive independently without the need to inhabit the inside of the flower.

Enemies (1) (p. 14)
Blob Thrower
"This plant buries its roots into the ground and scatters its dangerous offspring about."

Inhabitants & Eco System of SR388 (p. 18)
BLOB THROWER
"These massive flowers are impossible to defeat without the Beam Burst. Their size allows them to easily prevent you from progressing, and they have the ability to release Blob Swarms to attack on their behalf. They themselves don't attack, but the Blob Swarms, if not dealt with quickly, can cause plenty of problems."
BLOB SWARM
"A swarm-type enemy similar to Parabies, Blob Swarms are flying insects seen coming out of Blob Throwers. If you deal with them and their Blob Throwers quickly, you won’t have much of an issue, but leave these things unchecked and you relearn the meaning of “pest.”"

Walkthrough (p. 86)
BLOB THROWER
"Blob Throwers are indestructible when you first encounter them. At a distance, they like to hide low to the ground. When approached by something they perceive as a threat, they spring up out of the ground, impeding the threat's path. When given a bit of open air, they also spawn Blob Swarms to defend themselves. They aren’t much of a threat, and the Blob Swarms they call are more useful than menacing, since they can refill your resources. Until you find something to cut down this overgrowth, find a way around them." 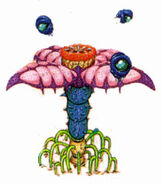 Official artwork from Return of Samus 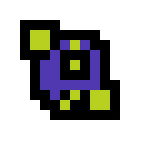 A Blob Thrower in Phase 3 in Return of Samus

A Blob Thrower in Area 3 in Samus Returns