The Blogg is a large, aquatic predator native to the Torvus Bog.

A highly dangerous creature with large jaws, it is one of the most dangerous threats to Samus Aran when she is underwater.

In order to stun their prey, Bloggs can launch sonic blasts through the water. These blasts will also interfere with Samus' Visor. Bloggs have a nearly invincible hide covering their bodies, making it nearly impossible to harm them. However, as it attempts to rush a target with its jaws spread open, it exposes its vulnerable mouth. This gives Samus a small time frame to shoot and inflict damage into this area.

The Blogg is the adult stage of its species, being preceded by the infant Bloggling. The leader of a group of Bloggs will become a larger and more powerful Alpha Blogg. A Blogg who's body is invaded and possessed by an Ing is called a Dark Blogg.

The Blogg uses speed and agility to close in on prey. It will batter foes with a ramming attack, then use its three tooth-filled maws to finish the job. Bloggs have a weak spot inside their mouths: the rest of their bodies are covered with a thick, damage-resistant hide.

QUESTION: Were there any interesting behind-the-scenes activity regarding the characters and creatures which appear [in this game]?

ANSWER: The Bloggs who live in the sea bottom in Torvus Bog. This creature is described as "the ugliest, most miserable creature in the universe". Next, the story surrounding the Luminoth Elite Troops [ Keybearers ]. Some troops had brothers, and while they tried to alleviate those younger brothers' doubts, they too lost their lives. You can find them somewhere in Dark Aether. Lastly, Squad Bravo's J. Brode dislikes bugs.[1] 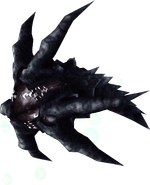 Samus locked onto a Blogg.