Wikitroid
Register
Don't have an account?
Sign In
Advertisement
in: Articles with non-canonical information, Species, Characters,
and 2 more

A blood monkey, or BloodMonkey is a possible character or enemy from the canceled Metaforce title in development by Retro Studios, which later partially evolved into Metroid Prime.

Several pieces of artwork in Prime's Concept Gallery use "monkey" to describe rooms and architecture. Design notes for several rooms refer to them as floors of the "monkey lair", and repeated references are made to "monkey hole[s]". This artwork was evidently used to create the rooms in the final game, as mapping data refers to Totem Access as "Monkey_Hallway", Burn Dome as "Monkey Lower", Dynamo as "Monkey_Shaft", and Ruined Gallery as "MonkeyUpper". The Burn Dome seems particularly connected to BloodMonkey, as the Incinerator Drone fought within the room is referred to as "monkeyFlamethrower" in the game's animation data, and its theme music is named "rui_monkeylower" in the game's files.

The concept art shows multiple floors of the "monkey lair", one of which has a large pit that is "open to below". The intent may have been for Samus to pursue BloodMonkey from the lowest floor of its lair to the top, taking care not to fall down to the bottom. If so, the "Monkey Lower", "Monkey_Shaft", and "MonkeyUpper" room names were likely in reference to the structure of the lair, with "Monkey_Shaft" serving to connect the lower and upper portions of the lair.

In 2018, Jack Mathews revealed that the "monkey" rooms would have held enemies called blood monkeys, but the creature was never prototyped.[1] 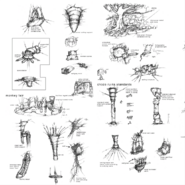 Concept art showing the third floor of the monkey lair, resembling the Ruined Gallery, as well as a monkey hole. 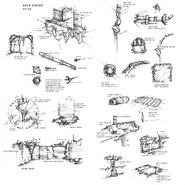 Art of the monkey lair's bottom floor, which appears identical to the floor of the Burn Dome. 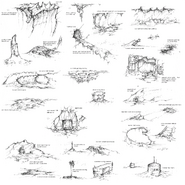 Art showing a "monkey beam", covered by snow and ice.