For other uses, see Bomb (Disambiguation).

Bombs can break certain objects, and are essential in defeating several Bosses, such as Flaahgra and Amorbis, although they are not of great use on many normal enemies. They have appeared in every Metroid game. In 2D Metroid games, Samus can drop multiple bombs with proper timing to perform an infinite Bomb Jump that propels her through the air. Bombs can activate Bomb Slots, which will in turn activate another object. They can also destroy Bomb Blocks in the 2D Games, Sandstone in Metroid Prime, and Talloric Alloy throughout the Prime series. A more powerful version called the Power Bomb is also available. In the Prime Trilogy and Metroid Prime Hunters, Samus can only use 3 Bombs in a short amount of time and the bombs must recharge before being used again. This limitation is carried over to Metroid: Samus Returns, though the number of bombs that can be rapidly dropped is increased to four.

In the 2D Metroid games, bombs appear as actual metal bombs which flash until detonating. Bombs tend to explode after two or three seconds, except in Metroid Fusion, where they take approximately 5 seconds (this makes it impossible to perform repeated Bomb Jumps midair, and was likely done to prevent Sequence Breaking). It is also possible to lay several bombs instead of the three at a time in the Prime games. In Super Metroid and Metroid Other M Samus can use the Charge Beam to perform the Five-Bomb Drop by charging the beam and then entering Morph Ball form.

During the Prime Trilogy, bombs appear as a blue energy ball when dropped. When they detonate, they are surrounded by blue light. Other M's bombs appear as metal capsules that explode into the same blue light. In the first two Prime games, they are used to do Bomb Jumps in small tunnels and to damage enemies. In Echoes, there is also a mini-boss called the Bomb Guardian which steals the Bomb upgrade from Samus and can consequently produce Bombs of its own that are identical to Samus's. However, the Bomb Guardian appears to be able to produce many Bombs simultaneously, while Samus is limited to three. In Corruption, Bombs still serve the same purpose, but a small flick upwards of the Wii Remote activates the Spring Ball, which can be used as a faster alternative for reaching areas in Morph Ball form. The Spring Ball also appears in the New Play Control! Prime titles, Metroid Prime Trilogy and Metroid: Samus Returns.

Metroid manual:"Samus can use this bomb while he is still small and round. Use the B button to attack an enemy with the bomb. Use the blast to break down barriers. You will need bombs when escaping from the Metroid."

1986 manga
"Lets you set Bombs in ball form. It's good for damaging enemies on the ground and destroying rocks."

Official Nintendo Player's Guide
"This item you can only use when Samus has become round from using the round ball. It is handy for attacking enemies that crawl on the ground, or to help you destroy narrow passages."

Metroid II: Return of Samus manual
"After obtaining the bomb, press the B Button while in the ball shape to set a bomb. Bombs have the power to hurt enemies, and to break through some floors, walls, and ceilings."

Super Metroid manual
"When you have the bombs, you can set explosive devices by making Samus roll into a ball and pressing the fire button. In addition to damaging enemies, Bombs can blow open certain sections of the floors and walls."

Metroid Prime flash
"Morph Ball mode includes the ability to drop small energy explosives. These Bombs are available in an unlimited supply but only three can be launched at one time. Use Bombs to destroy small obstacles and enemies."

Metroid Prime manual
"Samus will be vulnerable when she first gets the Morph Ball, but she'll soon find Bombs to arm herself. Samus has an unlimited number of these energy-based explosives, but she can only drop three at a time. Bombs can be used to destroy weak walls as well as enemies." 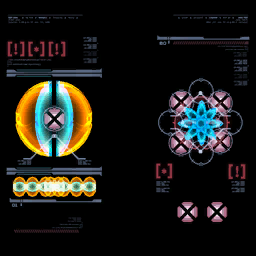 Metroid Fusion manual
"These limitless bombs can only be used in combination with the Morph Ball. They cause damage to enemies and can also be used to destroy certain sections of the walls and floors. Press the B button while in Morph Ball mode."

Fusion website
"Invaluable for blasting through sections of walls and floors, bombs can only be placed while Samus is in Morph Ball form. Bombs blast through Bomb Blocks and can propel Samus into the air."

Metroid Prime 2: Echoes manual
"Samus will be vulnerable early on in the game, but she'll soon find Bombs to arm herself. Samus has an unlimited number of them, but she can only lay three at a time. Bombs can be used to destroy objects and walls made of Talloric Alloy as well as enemies. By positioning the Morph Ball directly over a Bomb, you can propel it up into the air, effectively jumping short distances."

Small bursts of energy detonate from the MORPH BALL shortly after being triggered. Ideal for opening secret passages and eliminating small creatures. Press the FIRE button while in MORPH BALL mode to place the BOMBS. BOMB JUMPING is possible by triggering BOMBS with proper timing.

NORMAL BOMB
Press 1 while in Morph Ball to release.

Adam has not yet authorized
the use of bombs.

Metroid: Other M manual
"Press and release 1 in Morph Ball mode to set bombs that will damage enemies and break some floors and walls."

Super Smash Bros. for Nintendo 3DS and Wii U: Prima Official Game Guide
Damage 4~5% Max Damage 99% : 2 Hits
"Samus drops a bomb from Morph Ball form. The bombs explode on impact or after a short time. These bombs do slightly more damage if they hit an opponent directly. If Samus is hit by the explosion, it sends her upward a bit but does not deal damage to her."

Super Smash Bros. for Nintendo 3DS and Wii U Description
"Drop a bomb in Morph Ball form. You'll fly upward if you're hit by the explosion."

Smash Tips (Super Smash Bros. for Wii U)
"Samus morphs into a ball and drops a bomb. You can use the explosion to gain a little height."

Metroid: Samus Returns Samus Screen data
"A Bomb specially designed to be used with the Morph Ball. While in Morph Ball form, press [Y button] to set a Bomb."

Tips (Super Smash Bros. Ultimate)
Bomb (Down Special) – "Samus/Dark Samus morphs into a ball and drops a bomb. You can use the explosion to gain a little height."

In Super Smash Bros. for Nintendo 3DS and Wii U, the move can be customized. Its two variants include the Slip Bomb and Mega Bomb.

An update to Ultimate on January 29, 2019 reduced the vulnerability Samus and Dark Samus have when using this move.

Retrieved from "https://metroid.fandom.com/wiki/Bomb?oldid=267022"
Community content is available under CC-BY-SA unless otherwise noted.