Wikitroid
Register
Don't have an account?
Sign In
Advertisement
in: Pages in need of images, Chozo technology, Morph Ball,
and 10 more
English

Propels the Morph Ball at great speeds in chosen direction.

To scale Half-pipes, can be used to create kinetic energy to power devices.

The Boost Ball (ブーストボール Būsuto Bōru) is an upgrade to Samus Aran's Morph Ball seen throughout the Prime series.

While in Morph Ball mode, pressing and holding the B button (the R button in Metroid Prime Hunters) charges up a "boost", and letting go of the button allows Samus to speed up for a short period of time. The Boost Ball uses kinetic energy to perform its quick movements. It is essential in collecting Dark Torvus Temple Key 1, defeating the Spider Guardian, and shutting down Quad MBs and Dark Quad MBs. It is also able to interface with Spinners, and in Metroid Prime 2: Echoes and Metroid Prime 3: Corruption, the upgrade gives Samus the ability to Boost Jump off of one Spider Ball Track to another.

The Boost Ball is the only item that allows Samus to traverse large and unnaturally smooth Half-pipes. It can also be used to destroy small enemies or damage larger ones with the boost. It is acquired in Metroid Prime by going to the Phendrana Canyon, after defeating the Boost Guardian in Metroid Prime 2: Echoes and after destroying the Defense Drone in Metroid Prime 3: Corruption. In Metroid Prime Hunters, Samus has the item by default.

In Corruption, the Options feature Boost Ball Aiming enables a reticle so Samus can target a position to boost at or into.

As stated, the Boost Ball is charged by pressing the B button in the games, except for Hunters, where it is activated by stroking the touch screen or pressing the R button. The ability appears in Hunters despite the lack of any Spinner devices or Spider Ball Tracks. Story designer Richard Vorodi attributed the latter to the game's focus on other Bounty Hunters in addition to Samus, and added that not every location in the universe is "Morphball friendly".[1] It also lacks any offensive power, making it useful only for moving quickly or dodging enemy attacks.

The Boost Ball can be seen as a simple, easy-to-use Ballspark, though with a few drawbacks.

The Boost Ball is needed to gain a Friend Voucher, Bowling for Bots, in Corruption, where Samus uses the Boost Ball to knock down a group of Tinbots on Elysia (like the sport of bowling, hence the name).

Samus uses the Boost Ball as one of her attacks during the battle against her in Metroid Prime: Federation Force. On Hard Mode, it is capable of disabling a Federation Force Mech in one hit, and is also used by Samus to destroy the electrical walls that the soldiers shoot her into to stun her.

Use by Samus doppelgangers[]

Dark Samus and her copies are also capable of using the Boost Ball in Echoes and Corruption. However, their variant is seemingly Phazon-based and is far more advanced than the one used by Samus Aran, as it is capable of boosting their Morph Ball forms at high speeds for an incredibly longer amount of time in a single charge (it can be assumed that they are capable of gathering more kinetic energy than Samus's Boost Ball in a short charge). Samus-G in Corruption is also able to use the Boost Ball.

"Acquire the Boost Ball to spin away from enemies and ride up half-pipes to reach previously inaccessible areas. Hold the B button to charge up, and release to get a boost of speed."

"The Boost Ball accelerates the Morph Ball. Once Samus finds this power-up, press and hold the B Button to build up speed boost. When you release the B Button, Samus will accelerate in the direction she is rolling. This is especially useful for boosting up the sides of half-pipe areas."

"Once Samus finds this power-up, press and hold the B Button to build up a speed boost. Samus will accelerate in whatever direction she is rolling or even boost up halfpipes." 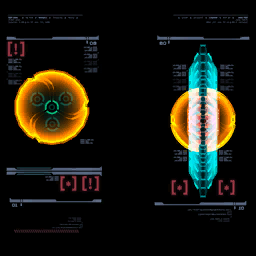 The Boost Ball can be used to increase the Morph Ball's speed for short periods.
Press and hold

to charge, then release

to trigger a quick boost of speed.

When charging, the longer you hold

, the longer (and faster) the Boost Charge will be.
Throughout the environment you will encounter U-shaped channels known as half-pipes. Using the Boost Ball in these areas will let you reach higher places.
Build a charge as you descend in the half-pipe, then trigger the Boost as you ascend the other side, This will give you the speed and momentum you need to reach new heights.
Some mechanisms will have circular channels that the Morph Ball can boost around.* Repeatedly boosting through these channels will build a kinetic charge which will activate these devices.*
You can damage some enemies by "boosting" into them.**

* These two sentences are included in Corruption, which otherwise features the same Logbook entry.

** This sentence is included in Echoes and Corruption, which otherwise features the same Logbook entry.

Unused content on the Metroid Prime 2: Echoes Bonus Disc accessible only through hacking shows that there would potentially be an upgrade or new function for the Boost Ball that allowed it to be used in the air. While locked onto an enemy, morphing in the air will allow Samus to home onto the enemy, similar to the Homing Attack from the Sonic series.[2] In a 2018 interview, Echoes technical lead engineer Jack Mathews revealed that this attack was intended for the game's multiplayer mode. The controls involved locking onto an opponent, jumping and holding the Morph Ball button to initiate the attack. He suggested that it was cut due to difficulty implementing it effectively, or for fear that the transition could be nauseating to players.[3]