Wikitroid
Register
Don't have an account?
Sign In
Advertisement
in: Pages in need of images, Dimensional, Ing,
and 5 more
English

The Boost Guardian is a Warrior Ing that had absorbed Samus's Boost Ball and subsequently mutated in Metroid Prime 2: Echoes. It is found in the Dark Torvus Arena and fought as a boss.

The Boost Guardian has several different attacks. It has the typical abilities expected of a Warrior Ing—slashing, possession, energy beams, and amorphous transformation. Its main attack is unleashed a few moments into the battle; it can boost around the room in the form of a spherical ball. In this latter attack, it can destroy any of the four pillars within the arena. If a pillar is destroyed, an Ultra Energy orb and an Inglet will appear in its place. Inglets otherwise spawn throughout the battle, which also succumb to the Guardian's boost attack should it come into contact with them.

There are two phases to the fight: the first involves fighting the creature as a regular Ing and inflicting damage, while the second has it utilize its Boost Ball form. Phase one is straightforward, but after a while it will transform and begin the second phase by boosting around at various speeds. While preparing to transform, the creature is immune to any attack. After three consecutive boosts, it will revert into a puddle and move about. During this time, the Boost Guardian is only vulnerable to Morph Ball Bombs. While boosting around, should the creature hit a pillar, or should Samus strike it with a Bomb, it will also transform into its puddle form. Eventually, it will return to phase one; a cutscene will play and Samus will be forced out of Morph Ball. The creature can become amorphous during this time as well, where it can still be damaged, but cannot be defeated until it becomes solid again.

This Warrior Ing has absorbed the power of the Boost Ball. It can boost-blast toward its enemies, using its body as a potent weapon. When it is not in solid form, engaging it in Morph Ball mode may provide better attack opportunities.

The Boost Guardian is widely considered to be one of the most difficult bosses in Metroid Prime 2: Echoes, due to several factors. First, Samus will only have a few Energy Tanks at the time of the battle, even if she has acquired every possible tank up to that point. Second, the Boost Guardian is fought in a small room with the only available cover - the four pillars - being easily destroyed by the boss's Boost Ball, and the puddle forms of the Boost Guardian and its summoned Inglets take up a large amount of floor space. Third, the lack of Safe Zones forces Samus to take constant damage throughout the battle, and health recovery is difficult; the pillars are destroyed erratically, and taking the time to defeat Inglets can leave Samus vulnerable to other attacks. Finally, the Boost Guardian's Morph Ball form is invulnerable and capable of dealing heavy damage with its Boost Ball (approximately 45 units on Hard/Hypermode). Although it can be forced out of the form with a Bomb, its speed and power can make this a difficult task. Additionally, in the GameCube versions, touching the Guardian in its puddle form was unusually deadly (60 units of damage on Hard mode). This was dropped to 40 units on Hypermode in the New Play Control! Metroid Prime 2: Dark Echoes and Metroid Prime Trilogy versions.

According to Mike Wikan, the difficulty level of the Spider and Boost Guardian battles was a last minute change, three days before Echoes went gold. Kensuke Tanabe, the game's producer, felt that the battles were not challenging enough and asked that they be made harder, but as a result they became extremely difficult.[1] Both battles' difficulty levels were reduced for the Wii rereleases of Echoes. Wikan informed Tanabe that the development team of Trilogy was reducing the difficulty, and Tanabe conceded it was the right decision.

Morphology: Boostlet
Boost Powered Inglet.
Boost Ball ability grants great speed to enemy. Lure it into destroying crystals in area; the energy within will damage the creature.
This Inglet has absorbed the power of the Boost Ball. It is capable of energizing its body and boost-blasting it toward its enemies as a weapon. The presence of the Boost Ball has made the Inglet nigh-invulnerable; only pure light energy can damage it now. Expose the creature to pure light to destroy it. 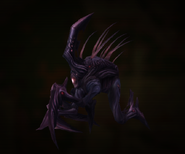 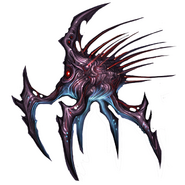