The Bottomless Pond[1] is a room in Kraid's Lair/Kraid. It appears, with significant differences between versions, in Metroid and Metroid: Zero Mission.

In both games, this is the leftmost shaft in Kraid's Lair and one of the longest. It contains a pool of fake acid partway down, which Samus can fall through.

In Metroid, the shaft is comprised of grey and black blocks, the latter of which appear to be made of rock, and pillars. The walls are lined with green bushes. Only two ledges and two platforms exist in the initial shaft, along with a pool of fake acid below. Through this is a longer shaft filled with multiple Rippers. Unless Samus has the Ice Beam and can carefully freeze and use the Rippers as Ice Beam Platforms#platforms, it is difficult to re-ascend the shaft. At its bottom is a single midair platform, a ledge on the right wall, and a floor above an inaccessible pool of real acid. The door at the base of the shaft leads toward Kraid's room.

In Victory Techniques for Metroid, Samus rushes into this room and begins to fall, but sees "water" (acid) below and assumes she is saved. Comically, she falls through the acid and lands in the floor, leaving an impression in it.

In Zero Mission, the shaft is slightly shorter and now has four doors, two of which connect to the same room. A large wall with a glass tube inside of it separates the first two doors; a Missile Tank can be found on the tube. Three midair platforms are present between the second and third doors. The bushes are now larger and have green pustules growing from them. The fake acid is now present under a bridge made of Bomb Blocks, which stretches into an alcove in the left wall. When the blocks are detonated with a Bomb, Samus will drop through the illusionary substance to a much lower shaft. While there are much fewer Rippers in the shaft in the remake, Samus's Wall Jump will allow her to re-ascend the shaft if she wishes. At the bottom of the shaft are two more midair platforms inhabited by Zeelas, and a door leading to Kraid's room.

Missile Tank (Zero Mission)
Samus must enter the shaft from the topmost door (reachable from the Baristute pit) and enter the glass shaft using her Morph Ball. She will collect the tank and then fall through two Pit Blocks down the shaft.

014 FREEZE AND HOP (pg. 131)
"If you're equipped with the Ice Beam, you can climb up the shaft in the middle of the hideout. Freeze the invincible Rippers that fly to the left and right, and use them as platforms. Timing is crucial - if you wait too long to jump, your platform will thaw and you'll tumble to the ground."

085 missile tank (pg. 46)
"Once you reach the left ledge, climb up, open a hatch and run to the right. Let the large enemy jump over you, and hit it with missiles. After you defeat the beast, climb up and fire diagonally downward into the next area to dispatch another monster. With both enemies gone, you'll have access to a Missile Tank."

086 FALSE BOTTOM (pg. 46)
"The area's left shaft appears to bottom out at a bridge over a lava [sic] pool. Blast open the bridge and fall. You'll discover that the lava is an illusion and that the shaft continues a long way down." 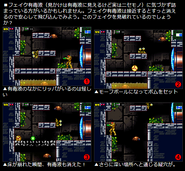