Wikitroid
Register
Don't have an account?
Sign In
Advertisement
in: Pages with conjectural titles, Rooms, Brinstar,
and 2 more

The "Brinstar Bomb room" is a room in Brinstar. It appears, with some differences, in Metroid and Metroid: Zero Mission. It is no longer accessible in Super Metroid.

In both of its appearances, this room houses a Chozo Statue holding the Bomb upgrade. In Metroid, the room is composed of metal bricks and pillars, and the statue is found on an upper ledge with two pillars behind it. The Bomb power-up is encased in an Item Sphere. Two pillars are found below the room, potentially support structures. A pipe is found below the statue. It is possible to roll into the pipe underneath the statue, but it leads to nothing except a large wall of the gold rock and pillar material seen in other rooms of eastern Brinstar.

In Zero Mission, the room's role is slightly larger. It is now comprised of blue architecture, with the Statue on a lower ledge. The room appears to be cylindrical, as the wall in the background appears to wrap around a circular ceiling. Three flat-sided pillars are also visible in the background, etched with Chozo markings. After the Bombs are obtained, Samus can morph into the Chozo Statue's hands to replenish her energy and Missile Ammo. She can again roll under the statue to access a hidden back room, with another cylindrical wall and two more support structures in the background.

This area acts as a hidden tutorial for the Bombs, featuring two ledges above and a Missile Tank on the topmost one. Along each ledge is a single Bomb Block, which Samus can destroy with her new upgrade, allowing her to Bomb Jump to the expansion.

025 normal bomb (page 33)
"You'll find the Normal Bomb upgrade on the other side of a red hatch. Collect the item, then curl up in the arms of the Chozo Statue to reenergize. With the bombs, you'll have the ability to open new territory and continue exploring Zebes."

026 missile tank (page 34)
"Immediately after you collect the Normal Bomb upgrade, use it on a pair of blocks under the Chozo Statue and roll left to an unmarked room. You'll find a Missile Tank above two layers of blocks. Bomb through the breakable blocks, then use more bombs to propel yourself to the upper part of the room."

The room in Victory Techniques for Metroid. 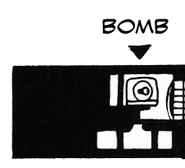