Shell is vulnerable to concussive blasts.
The Brizgee is an insectoid creature with crustacean-like claws native to Aether. Its body is protected by a hard shell made of sand particles that have been fused together, which can be shattered by a Missile or Morph Ball Bomb. Once its shell is destroyed, its stinger, similar to that of a scorpion's, will be exposed; at this point, the Brizgee is simple to dispatch by targeting the stinger and shooting.

Brizgees are very versatile creatures, inhabiting both the Agon and Torvus sectors, and are capable of surviving underwater; they are occasionally seen submerged. Rooms featuring Brizgees include Mining Station A, Catacombs Access and Training Access.

Morphology: Brizgee
Venemous insectoid.
Poisoned stinger concealed in back-mounted shell. Finish it off quickly once the stinger is exposed.

The Brizgee's tail ends in a venomous barb, which it conceals underneath a hard-packed layer of fused sand. A series of sharpened ridges along its body discourages most predators: those foolish enough to harass the Brizgee are quickly introduced to its deadly stinger." 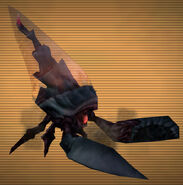 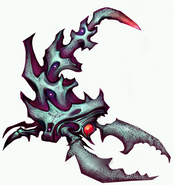 Concept art of a damaged Brizgee

An early version of the Brizgee with more colorful textures.
Español
Community content is available under CC-BY-SA unless otherwise noted.
Advertisement