Bryyonian Golems are mobile statues developed and used by the Reptilicus. Bryyo Data implies that most of these machines, if not all, were invented by the Lords of Science or by individuals who supported the latter, with the first models being built during peaceful times. They can be split into two categories: there are those that perform labor and ceremonial tasks too difficult or impossible to accomplish by the organic beings of the planet, and the other class strictly used for war during the Age of Schism. Samus encounters many from both categories during Metroid Prime 3: Corruption and is able to activate a few of them by usage of the Morph Ball. They are extremely durable and surprisingly agile. Several are capable of wall jumping, blowing fire, blowing freezing breath, and energizing various objects.

Based on their names, scans, and tasks they are capable of performing, these Golems can be assumed to have been constructed during an era of peace on the planet, prior to the global war. As a result, they are likely to have been the first of their kind. Labor Golems were seemingly used as tools in the construction of homes and other structures, potentially serving other public functions as well. Ceremonial Golems appear to be programmed to aid in the procedures of formal occasions and celebrating particular events, and may have also been used for decorative purposes. Only a single one of these machines, a Labor Golem, will continue to function in-game no matter the amount of times it is used by Samus Aran. Other Golems will cease to work due to their low residual power being depleted after Samus activates them to accomplish relatively small tasks.

The Mogenars were models later developed in the Age of Schism, during a war that consumed most of the planet and destroyed the advanced Reptilicus civilization. They were used by the Lords of Science to fight and defend against the Primals' war bands who sought the former's annihilation. Most War Golems were substantially larger than their peaceful predecessors, with one reaching the size of a small mountain, and several of these can be seen holding large melee weapons. It is unknown how effective they were against their numerous, minuscule targets and their offensive magic arts. However, according to Bryyo Data, these machines required large amounts of rare resources to sustain and fuel them; as a result of the war's prolonged duration, along with collateral damage to the environment, these rare resources were eventually exhausted, making the War Golems unusable and leading to the Primals' victories over their enemies. Few of these remained in stable conditions in the following years, and fewer were those that possessed enough energy to be used by Samus for an extremely short time.

When only a single Lord of Science remained alive, he took in the advice of the Chozo given to his race years ago, and crafted Mogenars with both science and magic. Unlike previous War Golems built strictly with technology, these special Mogenars ran on the vastly more abundant energy resource called Fuel Gel, and utilized magic-based weapons and abilities. He made use of the special Mogenars as bodyguards only, unlike his fellow Lords of Science who used their technology-based War Golems as machines of war. When an accident detonated the last Lord of Science's nearby Fuel Gel supply, his Mogenars ceased to function, dooming his life against the eventual attack from the increasingly feral Primals. Many years later, following the impact of a Leviathan on the planet, one of these special Mogenars was somehow moved to the inside of the meteor and, after being energized with Phazon, became the Core Guardian of the Bryyo Seed. It was defeated by Samus Aran. 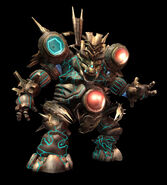 A Mogenar built with science and magic