This article is about the turrets in Tourian and E.M.M.I. Zones. For other uses, see Cannon (Disambiguation)

Cannons are affixed to the walls and ceilings of the Zebesian Command Center and fire small projectiles at Samus. These artillery batteries seem to lack targeting systems, as they swivel and shoot in entirely random directions, regardless of who or what is nearby. However, this particular attack pattern makes them somewhat unpredictable and dangerous due to their numbers, especially when accompanied with the infinitely spawning Rinkas.

Samus can safely stand on top of the Cannons' glowing circular bases unless they fire a shot directly upwards at her. Their projectiles, although not terribly damaging, are a great nuisance, as a direct hit will often knock Samus into the lava below, along with being capable of destroying her limited number of Missiles.

Cannons are invulnerable to all of Samus's weapons. They appear to be linked directly to Mother Brain, as the only times they were seen being destroyed were immediately upon the supercomputer's defeat (first form in Super Metroid); the gun barrels on the Cannons explode while their circular cores remain.

These mechanisms can be seen in the Galactic Federation blueprints for the Future Aurora Complex, which is closely modeled after the Zebesian Command Center, as featured in one of Metroid Prime 3: Corruption's preview trailers. The Federation might have intended to add cannons to their Aurora Unit(s), as all the benevolent AUs present in Corruption are seemingly defenseless.

A defense system resembling the Cannon is the Ring Beam Unit encountered in the Galactic Federation's Bioweapon Research Center in Metroid: Other M; however, these mechanisms fire Rinkas instead of bullets. A possible variation of the Ring Beam Units make an appearance during the battle against Aurora Unit 313 in Metroid Prime 3: Corruption which fire harmful energy spheres with slight homing capabilities. 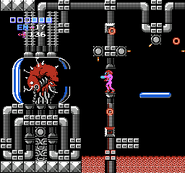