Electrical shocks through the floor, uses cleaners for physical harm

The Caretaker Class Drone was the largest stationary mechanoid Samus encountered in Metroid Prime 2: Echoes. It was used by the Luminoth to maintain and protect the experimental energy chamber that the Luminoth used in the Main Research facility of Sanctuary Fortress. Samus only encounters one Caretaker Drone, and she must destroy it before she is able to reach the path to the Screw Attack.

The Caretaker used mechanical limbs to clean and keep the chamber under maintenance. Like most technology the Luminoth made, its second duty was to fight Ing. Thus, the Caretaker will use its limbs to fight away any enemies.

The battle involves Samus using the Boost Jump back and forth between the Spider Ball Tracks, avoiding the harmful cleaning arms while attempting to hit its sensor orbs and expose its control core. This is harder than it seems: Although the sensor orbs stay extended relatively long, the control core is only vulnerable to damage for barely half a second. Also, the Spider ball tracks will divide, showing gaps between that Samus can not cross while rolling. In the lowest part of the tube, there is an uninterrupted ring, while in the second part there are two, and in the highest part three parts of Spider Ball track.

When Samus has hit the control core three times, the Caretaker Class Drone will explode and reveal a Spider Ball Track up and out of the tube.

The Caretaker drone was designed to protect and maintain an experimental energy chamber. It uses electrically charged limbs to perform its duties. The drone requires sensor updates to fight: a vulnerable detection unit will extend periodically to search for targets. Destroying this unit would weaken its combat ability.

Zoid Kirsch worked on the Caretaker Class Drone encounter. The camera system used during the battle, which Kirsch calls a "spindle camera" since it rotates around the cylindrical tank, was created by Mark Haigh-Hutchinson.[1]

Datamining of the demo of Echoes has revealed a mechanism similar to the Caretaker Class Drone, called the Ingkiller. All that remains of this mechanism is a Logbook entry.

The Ingkiller was designed to protect points of entry within the Luminoth Fortress from the Ing; it now seeks to eliminate all living things.
Its four attack limbs can be disabled, forcing it to use a secondary beam attack to defend itself.
The beam system requires sensor updates to function; a vulnerable detection unit will extend periodically to search for targets.
Destroy it to take the beam offline. 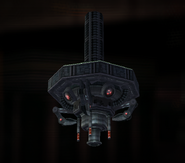